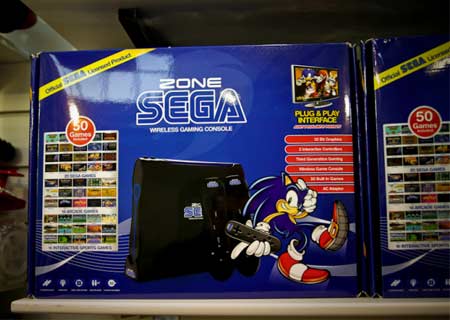 There has always been a heated competition between Microsoft and Sony especially in terms of new generation gaming consoles. With gamers looking forward to Project Natal and the Sony motion controller wand coming their way, it seems like a new offering is set to creep up and give the other companies even more competition. The console is question here is noted to be the new Sega Zone which is slated for a summer release.

According to Pocket Lint, the upcoming system is already packed with 20 classic Sega games. These include the likes of Sonic and Knuckles, Alex Kid, Ecco the dolphin and Golden Axe. Besides these titles, there are a further 30 titles to look forward to, out of which 16 are motion controlled.

Players as well as Sega fans can indulge in gameplay through the two included wireless remote controls. These gaming controls can also be used to play many sports classics such as darts, beach volleyball, table tennis, fencing and golf. Gamers can use the controllers just as they would while playing Nintendo Wii games.

As of now it seems that players will not be able to load in more titles for the console. The company however reveals that it hopes to bring out more Sega games in the future for the upcoming system.

The Sega Zone gaming console is priced at approximately £50 and can be acquired this summer.