New research proves that RSA encryption can be foiled 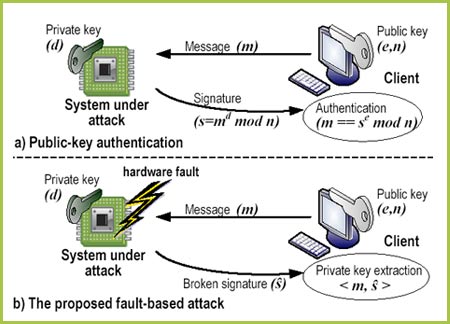 RSA authentication is known to be the most widely adopted encryption method implemented in servers, media players, smartphones and similar devices apart from serving as a security system for safeguarding sensitive information online. Now researchers at the University of Michigan have found the Achilles heel in this RSA algorithm – tweaking voltage supplied to the device holding the private key can render information required to reconstruct this key offline.

Computer scientists at the university managed to discover the private key in around 100 hours by using their voltage tweaking system. Since the key comprises of over 1,000 digits of binary code, the time required to reconstruct it could make it an impractical method of hacking into the security systems of relatively large institutions. The researchers claimed to have constructed an inexpensive device in order to extract the key using voltage fluctuations.

“The RSA algorithm gives security under the assumption that as long as the private key is private, you can’t break in unless you guess it. We’ve shown that that’s not true,” explained Valeria Bertacco, associate professor in the Department of Electrical Engineering and Computer Science, University of Michigan while commenting on the research paper that was presented at the Design, Automation and Test in Europe conference, Dresden.

Fluctuating voltage is observed to stress out the computer and generate minute hardware errors that throw up small pieces of the private key. By simulating enough faults, researchers were able to reconstruct the key offline without leaving any traceable tamper evidence. This study need not create mass panic since the paper also seems to have given a possible solution to this vulnerability – salting, or a common cryptographic technique which jumbles the order of the digits randomly each time the key is demanded.

“RSA authentication is so popular because it was thought to be so secure,” cited Todd Austin, professor in the Department of Electrical Engineering and Computer Science at the University of Michigan. “Our work redefines the level of security it offers. It lowers the safety assurance by a significant amount. We’ve demonstrated that a fault-based attack on the RSA algorithm is possible.”

The paper titled ‘Fault-based Attack of RSA Authentication’ was presented at the DATE conference by Andrea Pellegrini, doctoral student in the Department of Electrical Engineering and Computer Science, University of Michigan. Meanwhile technology manufacturers may want to introduce a few small tweaks to the manner in which this RSA algorithm is implemented.