The Google Camera app with its lens blur and photosphere features comes in quite handy for photography enthusiasts to test their skills. They can now extract much more from it thanks to the latest update that has been issued by Mountain View through the Google Play store.

You can now take advantage of a couple of panorama modes to spruce up your wide format shots. One of them is fisheye which produces a hemispherical effect in your photographs, while the other is a square wide angle setting for panoramic shots. 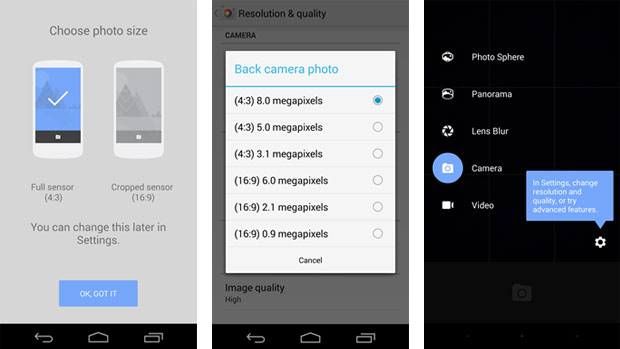 Another big change introduced by Google Camera through this update is regarding the aspect ratio of pictures to be clicked. The full frame option of 4.3 stays put but a choice of clicking in the 16:9 ratio gets introduced. This of course results in lowered resolutions of final images, so be warned of that.

And then there’s the timer for clicking self-timed shots. You can set it for 3 seconds or 10 seconds, according to your liking. The Google Camera app is a great way to experience those features which were exclusive to Nexus devices prior to its arrival. These include photospehere and more. This application also boasts of a lens blur attribute which lets you adjust focus on your images after they’ve been clicked.

Recently, Google had issued another big update to the software to infuse it with the ability to snap pictures while a video is being recorded. The app can only be downloaded by certain devices running the Android KitKat OS.

Like we said, its update is live now on the Play store but those who haven’t received a notification yet can download its APK via Android Police.