The all-new Nexus 7 tablet which has gone up for pre-order in the US and UK will apparently make its way into India. Google hasn’t given any concrete details as yet, but its country-specific Nexus website has an image of the tablet with a coming soon banner fixed to it and the previous generation slate has been rebranded as the 2012 edition on the Play store. Now, before we all get our hopes up, this could take weeks or even months, but we hope for the better.

The new Nexus 7 is being offered in 3 variants and this time, the company has dropped off the idea of having an 8GB model. The base option comes with 16GB of storage and there’s a 32GB high capacity version as well. The latter is also available with 4G LTE cellular support. For non-4G markets, we’re quite skeptical if the search giant plans on selling this very same version or a new model with HSPA+ connectivity. 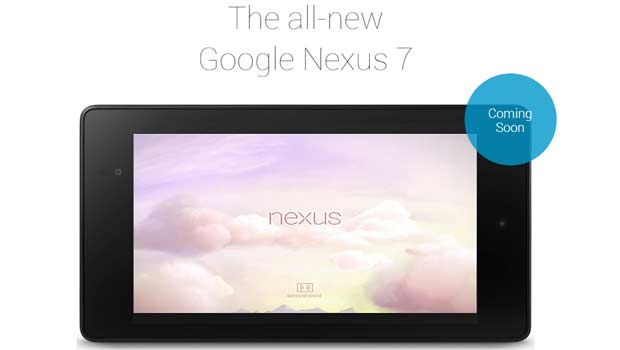 In the US, the new Nexus 7 is currently retailing for $229 and $269 for the Wi-Fi-only 16GB and 32GB versions, respectively. The Android 4.3 device, like its processor, comes with a 7-inch IPS touchscreen, but the resolution has been bumped up to 1920 x 1200 pixels. There are dual cameras on this slate, a 1.2MP front snapper and a 5MP rear lens and the new Nexus 7 is even more powerful with the inclusion of 2GB RAM, a quad core Snapdragon S4 Pro SOC and a 3950mAh battery.

While there’s no official word on when the new Nexus 7 will be unveiled in India, the arrival of a fresh iteration is usually indicated by price drops for its predecessor, mostly to clear up remaining stock. In this case, the 2012 edition is still retailing for the same amounts. You can be sure that we’ll keep you updated with the latest changes as and when they happen.