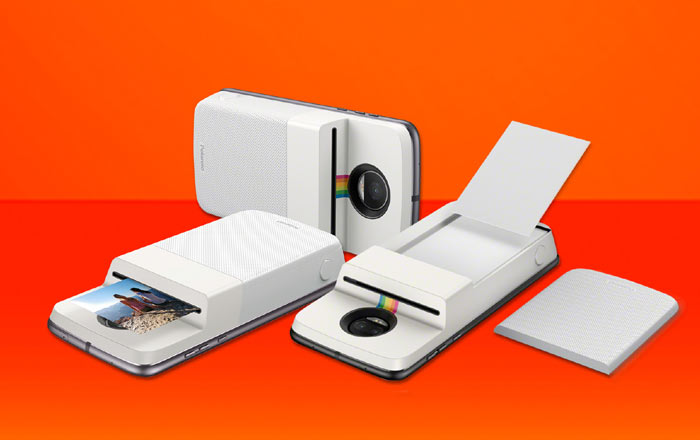 Motorola’s come out with a brand new Moto Mod in partnership with Polaroid, evoking the nostalgic feel of instant cameras with an Insta-Share Printer mod. Like the others which have come before it, the new accessory just has to be attached to any Moto Z model and it’ll be ready to go.

The Polaroid Insta-Share Printer doesn’t have a camera of its own, so you’ll have to rely on your Moto Z to capture shots. There’s a physical button on the Moto Mod which can be pressed down to launch the camera and shoot snaps. The images magically emerge from within the mod and can be stuck to surfaces since they have a peel-off adhesive back.

You’ll be using 2 x 3-inch ZINK paper for your printing needs. It doesn’t require ink and is supposed to be smudge-proof. You’ll have to buy refills of the paper of course, but that seems to be the only recurring cost involved with the Polaroid Insta-Share Printer. Once the photo has been captured, you have the power to customize the shot with borders, text, and filters.

This can be seen as a distinct advantage for anyone who thinks just buying an instant Polaroid camera would be a better idea since there aren’t any editing options available in the latter. You don’t even have to stick to photos you’ve clicked on the Moto Z since the mod can print snapshots from Facebook, Google Photos, and Instagram.

The Polaroid Insta-Share Printer Moto Mod will be available via Verizon and Motorola’s site this week. It’s currently up for pre-orders at a $199.99 price tag. The ZINK paper starts at $9.99 for a pack of 20 and can be bought here.