The third generation Moto G or the Moto G (2015) as it’s being referred to is all set to be unveiled on July 28, but leaks regarding it are arriving in hordes on a day by day basis. The latest among the lot seems to confirm early suspicions that the device will be eligible for Moto Maker customization in applicable markets. Additionally, a Portuguese promo video of the phone also managed to leak out.

A goof up from Motorola resulted in details about the various Moto G options popping up on its website. While the company was quick to remove them, a screenshot was promptly grabbed by a Reddit user, giving us a chance to witness all the aspects of the handset that will be changeable via Moto Maker.

As predicted before, white and black will be the base options for the front ends of the Moto G (2015). Buyers will even be able to choose between ten colors for its rear housing and an equal number of shades for its accents. The screenshot coming from Reddit user ‘Coconuttery’ also points out that Flip Shells will be offered along with device for an additional $20. 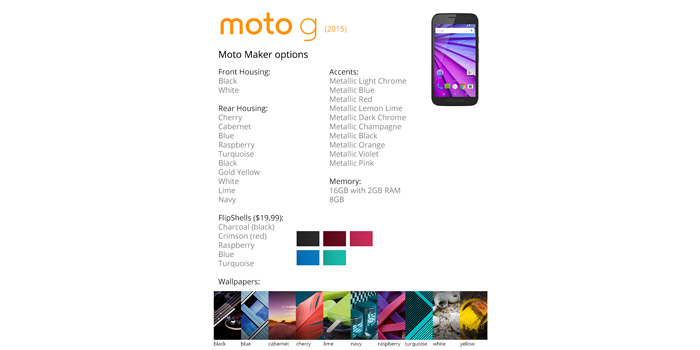 The much debated topic of how much memory this smartphone will bear is being given some closure by this leak. It seems the phone’s 16GB variant will ship with 2GB of RAM, while its 8GB version will gain 1GB of RAM. The leaked promo video which comes courtesy of 9to5Google, and can be spotted in the space down below confirms that a microSD card slot, 4G LTE and dual SIMs will be supported by the handset.