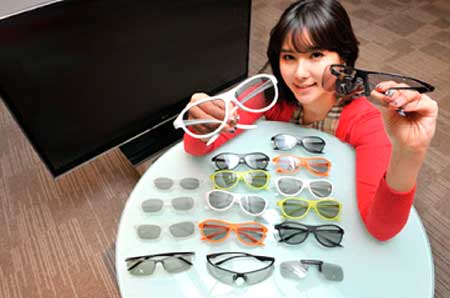 There’s clearly no reason to be wearing a pair of awkward shades while watching content in the third dimension, with the recently unveiled LG 3D glasses. The lineup includes options like the F310, the clip-on F320 as well as the Alain Mikli F360, which has been created by the popular designer to bring in a dash of style. This series arrives with the claim of being comfortable and light besides featuring curved glasses within a neat structure to lend the appearance of fashionable accessories.

First up in the LG 3D glasses range is the F310 model. It weighs about 13.5g, making it 20 percent lighter than its predecessors. The design is complete with soft lines and a slim frame. Additionally, the curved lenses are said to fit better and proffer an improved 3D viewing experience. Then comes the F320 glasses for systems based on Film Patterned Retarder technology, which forms the core of the Cinema 3D TV. The F320 tips the scale at 5.5g and that’s apparently 25 percent lighter than the previous generation clip-on 3D glasses

“Compared to active shutter glasses, LG’s 3D glasses are far more comfortable to wear and much more affordable, making it possible for large groups and entire families to watch 3D programs and movies together,” states Havis Kwon, President and CEO of the LG Home Entertainment. “LG is addressing two of the biggest barriers to 3D acceptance head-on and we’re confident consumers will react favorably to our strategy in the coming year.”

Developed in collaboration with Alain Mikli, the F360 boasts of a half-rim frame design and it weighs around 16g. Sporting a curved construct, this glass covers up most of the wearer’s face for enhanced 3D viewing. Plus, this range can be worn in theaters, since they employ the same FPR and RealD technologies which movie halls utilize. Prospective users may have a wait a bit to get their hands on these offerings though.

This latest range of the LG 3D glasses can be expected to become available by the first quarter of next year.