New iPod touch, nano and shuffle to be unveiled at Apple’s September 12 event 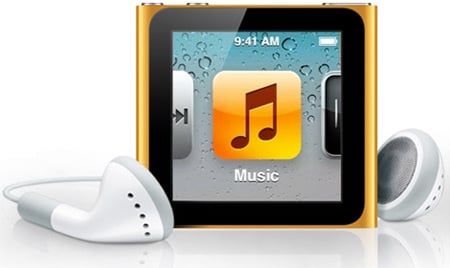 According to the latest from the rumor mill, Apple’s September 12 event will witness the company unveiling a new iPod nano, a ‘tweaked’ iPod shuffle and more than one edition of the iPod touch. If the story is true, then the nano pictured above may be the last version to sport such a diminutive form factor.

That’s because Apple apparently has a taller nano with Wi-Fi in mind. The player is expected to arrive in 8 hues and Cupertino may only be letting out a high-end spinoff this time around. The present device on the higher end of the price ladder offers 16GB hoarding room and it’s tagged at $149. It’s been touted that we might just see something similar in terms of price and storage of the upcoming device.

Currently, the shuffle is drenched in 5 colors and marked at $49. According to the unofficial word, potential buyers will get 3 additional shades to choose from and the price will be more or less the same. It’s being said that Apple hasn’t really changed much in this functional, mini player, though it’s uncertain whether the company has dropped in extra storage space or not.

Having saved the juiciest bit for the last, the entry-level iPod touch is anticipated to flaunt the same exterior as the 2010 model. The unconfirmed news hints that the pair of higher priced touch players will sport $299 and $399 tags. Although these labels may be affixed to the high-end variants, it still remains to be seen if the clues lead to 32GB and 64GB capacities or not.

9to5Mac, who’s the source of this news, also speculates that the new iPod touch devices may land painted in various shades. Well, we’ll just have to keep our fingers crossed until the Apple event unfolds.