There have been instances in the past wherein the upcoming new iPhone had been rumored to hold onto a fingerprint sensor and now, recent developments have gone ahead to give credence to this belief. It seems that Apple will indeed be including this feature into its upcoming flagship, most probably with a view to enhance the device’s security system. So indicates a folder dubbed BimetricKitUI, which has been spotted by Hazma Sood in the iOS 7 beta 4 release.

Seen below is the picture rendered by Sood which shows the folder and other details. 9to5Mac points out that the new iPhone with the VoiceOver feature switched on will narrate the strings seen in the image. Based on details from a source ‘familiar’ with the development of the handset, the report notes that the UI for fingerprint scanning has been completed and this attribute will most likely serve the purpose of unlocking the device. So, all that users will have to do to get their prints scanned is simply swipe their finger on the home button of the new iPhone.

This could be listed as an accessibility feature just like the function which permits monitoring the interface with the help of head gestures. Leaked sometime around last month, this attribute is also said to be introduced through the forthcoming iOS 7 platform and it ought to be seen in the new iPhone as well as the iPad. While the aforementioned tools have yet to venture into an official realm, the company has already divulged many facets that the platform will drive in. They including Control Center, iTunes Radio, AirDrop and more. 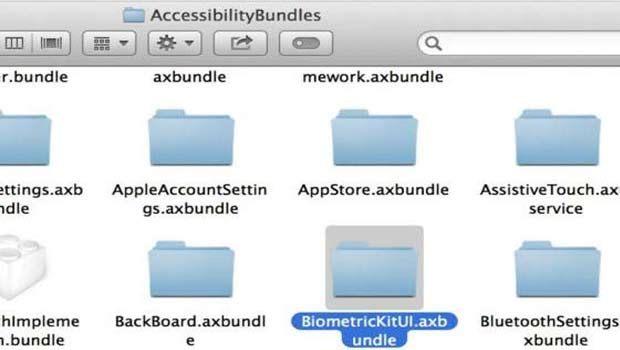 Since the Cupertino-based conglomerate hasn’t gone on record revealing the existence of the new iPhone and the possibility it it arriving with a fingerprint sensor, it would be wise to take the aforesaid information with a massive grain of salt.