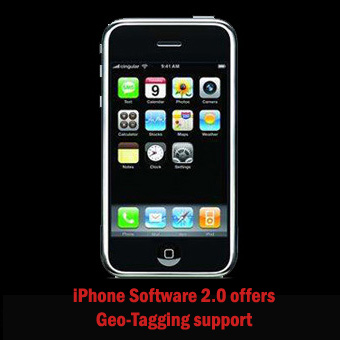 While, customers are looking forward to the 3G version of the iPhone, Apple is working hard towards keeping owners of the first gen device happy.

An all-new beta of Apple’s iPhone Software v2.0 Update has been rolled out clandestinely to a select few enterprise partners, reports Apple Insider. The latest release bundles a few new preferences and the beginnings of geo-tagging support for the phone’s Camera application.

Geotagging is of course the process of adding geographical identification metadata to several media such as websites, RSS feeds, or images and is a form of geospatial metadata. This data usually comprises of latitude and longitude coordinates, along with altitude, bearing and place names. This is done so that those files can later be referenced, searched, and grouped based on their source.

The lucky few who have been able to get up, close and personal with the new release, which is named 5A292g, note that location-aware services such as “Maps” and “Camera” now ask the user’s permission before transmitting data used to spot their current geographical location. They also add that Apple is at present in the works of adding support for geo-tagging photographs

Furthermore, according to Apple Insider, the Cupertino-based company has also added a toggle under the iPhone’s general preference pane through which users can enable/disable Location Services on a system-wide basis.

Even though the latest beta of Apple’s iPhone Software v2.0 Update prompts users for permission to use Location Services in the Camera application, individuals who have acquainted themselves with the software, claim that it appears that the location metadata is not yet embedded in new photographs.

Interestingly, the iPhone Software 2.0 is slated for a June launch, in conjunction with the company’s much-anticipated next-generation 3G iPhone.