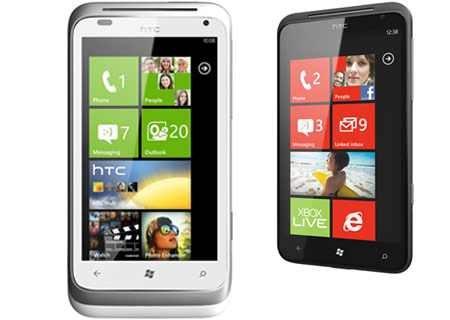 It turns out that the Omega we spotted last month is part of the new HTC Windows Phone lineup, and it will go by the name HTC Radar while accompanying the HTC Titan. Both devices run Microsoft’s latest spin on their mobile OS, Windows Phone 7 Mango.

The HTC Radar has this sort of solidly good looking aura about it with an aluminum unibody shell and rectangular shape that’s curvy around the corners. It embeds a front facing camera and all those who’ve been wondering if Mango will support front facing cameras can rest assured now.

There’s an option for switching to the snapper on the front for clicking photos or recording videos as well as API support aimed at the application platform. And the Windows Phone team has yet more to reveal on specific apps which can leverage this capability, news that should interest software developers.

As for the HTC Titan, the handset sports a rather expansive 4.7” touchscreen and a 9.9mm slim brushed aluminum exterior. Just like the Radar, it has a front facing camera too. Users have been complaining about small font sizes on WP7 and the large screen size ought to change this view, according to Joe Belfiore on the official Windows blog.

The HTC Windows Phone Mango Titan and Radar are expected to start shipping from next month onwards. They will roll into Europe and Asia initially as the company begins launching the devices on a global scale. Pricing details will have to wait for a later date.