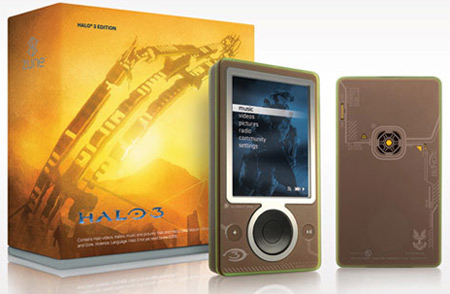 A while ago, we had reported about Microsoft’s Halo 3-themed black Zune digital media player. Now, the company is introducing a new brown version of the Halo-themed player, lending a military feel to the Zune.

The inspiration behind this military-themed Zune is also very interesting. After receiving feedback on the popularity of the Zune players from US soldiers, teams from Microsoft Zune and Microsoft’s US Federal business joined hands to develop this brown army version.

And, voila! You have the Halo 3 Military Edition. This particular version will be available exclusively at military retail stores this August.

Microsoft is now offering the Zune Halo 3 Military Edition to military personnel as well as their families at discounted prices via military retailers such as AAFES and Navy and Marine Corps commissaries starting early August.

The Zune Halo 3 Military Edition will have the exact same specifications of the usual Zune media players. Specs include 30GB storage, 3-inch screen that displays content in portrait or landscape mode, a built-in FMF tuner, rugged exterior and wireless capabilities for Zune-to-Zune sharing.

The only thing different about the Zune Halo 3 Military Edition is that it will be brown and have an army-look. It will be packaged in a collectible Halo 3 box and will also come pre-loaded with artwork, trailers and music from all three Halo games.

We think that this is a great initiative on the part of Microsoft as they are giving back a little something as a tribute to US soldiers who constantly have to put their lives in danger.