New Google Nexus 7 specs seep out, may be available by July 31 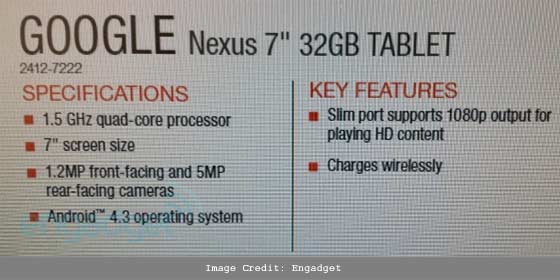 Even before we can confirm that the New Google Nexus 7 will indeed form a part of the upcoming event on July 24, an image of what comes across as the tablet’s specifications sheet has tiptoed to the fore. Not only has the picture detailed out coveted information pertaining to the slate, but it has also given leverage to another majorly anticipated product by Google – Android 4.3.

By the looks of it, the rumored Google Nexus 7 will be playing host to the latest version of Android Jelly Bean. Furthermore, the previously rumored onboard Qualcomm Snapdragon S4 pro chipset may accommodate four cores, each of which have been clocked at 1.5GHz.

We doubt the tablet’s display will stray away from the older version‘s screen estate of 7-inches. Apart from a 5MP primary camera and a 1.2MP secondary webcam, a Slim Port may be seen on the new Nexus 7. This addition ought to support 1080p output, indicates the picture. 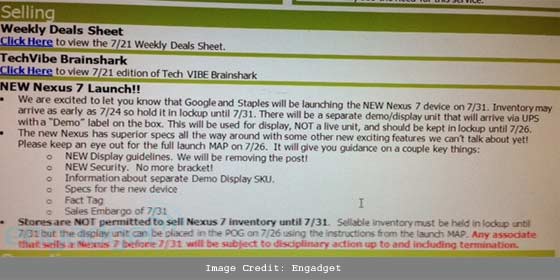 If speculations are anything to go by, those with an aversion for directly plugging to wall outlets should be pleased to learn of the device’s wireless charging capabilities. The new Google Nexus 7 could be trudging into the market in 16GB and 32GB variants which will be priced at $229 and $269, respectively.

The news, courtesy Engadget, has also spilled out that Staples will be the first shopping outlet to put the new Nexus 7 on sale and this should happen as early as the end of this month.