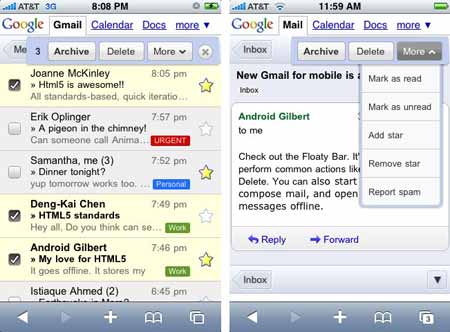 Google has updated Gmail for iPhone and Android, announced the software giant today.

The highlights of this update are being touted to be improved speed while opening an email, navigating, searching and more. iPhone/iPod touch owners, make a note that the new Gmail supports only the OS 2.2.1 or above.

The app will work even when the data network ceases to work smoothly and, “You’ll still be able to open recently read messages and to compose over a flaky, or non-existent, network connection,” says Joanne McKinley, Engineer, Google Mobile in the blog post.

Google has worked upon HTML5 and Gears and aggressive caching for a faster Gmail. The new features also include the a “floaty bar” that saves your fingers from the trouble of scrolling the entire page to do actions like marking mails, archiving, deleting them and more. This floaty bar shows buttons of these activities as it floats on the page while you scroll up and down.

Also, the look of the Mobile Gmail has been transformed into a neater version with labels that are now easily readable and the search menu that has been shifted to the top header for easy access.

The new Gmail is available for all Android powered phones. It is available in English only for both Apple and Android devices.

The new Gmail was first demoed by Vic Gundotra, VP of Engineering, Google, at the February 2009 GSMA Mobile World Congress event in Barcelona and then at the Web 2.0 in San Francisco.