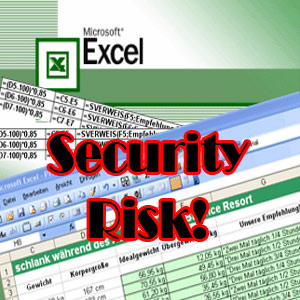 Software giant Microsoft has reportedly issued a security advisory that warns computer users of a vulnerability that targets some of its Office Excel versions.

According to the advisory, Microsoft Office Excel 2003 with Service Pack 2, Excel Viewer 2003, Excel 2002, Excel 2000 and Microsoft Excel 2004 for the Mac are all affected by the vulnerabilities.

The most recent version of the spreadsheet programme Excel 2007, Excel 2007 SP1 and Excel 2008 for Mac are not affected.

It is known that people who open a specially crafted Excel file from an email attachment or even those who visit a compromised web site could well be inviting hackers to take over their PCs for malicious purposes like stealing personal information like passwords.

As of now, Microsoft is yet investigating reports of such attacks. However, the company has not yet determined whether or when it will patch the hole.

But, the software maker said that users of the affected software can protect their computers by using a tool tat scans the files for bad code before opening also known as Microsoft Office Isolated Conversion Environment.