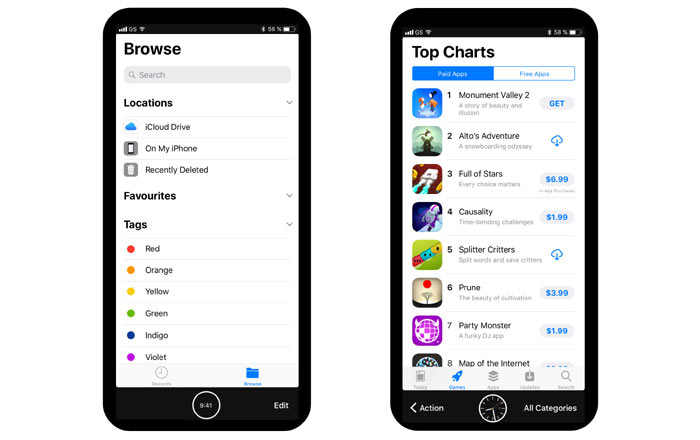 The biggest piece of information to come out of Apple’s firmware leak from earlier this week is an alleged image of the iPhone 8 which shows off its bezel-free design, with only a notch at the top interrupting the lack of borders. Designers have now come up with some intriguing concept art to show how the company might deal with the cutout.

One strange aspect of iOS 11 is a new Large Title navigation style which puts titles outside of the navigation bar. This results in the middle of the screen looking empty in current iPhones since there’s a big gap between the headline and navigation buttons like Edit. Allen Pike theorizes that this is meant specifically to accommodate the camera notch.

As can be seen in the photos above, Pike thinks Apple might shift the navigation bar down to the new Function Area. That way, options like Back and Edit will be easily accessible by your fingers. He’s even put a virtual clock or simple timestamp within the virtual home button’s circle, answering the question of where the time will go now that there’s no space for it up top.

Pike’s mockups are complemented by images created by Max Rudberg. He’s actually come up with 3 theories as to what iOS 11 will do now that it has a cutout on its hands. One embraces the notch, with the screen just moving around it. The second tried to hide it with a black strip to blend it with the screen.

This third blends the top and bottom bar for a seamless black look. Rudberg prefers the first since the others make the screen appear smaller than it is. Many Apple fans might not agree though, given that a number of them find the notch a distraction.