Canon, with its new PowerShot range has asserted that super-zoom lenses are here to stay on point-and-shoot cameras. The PowerShot SX400 IS and SX520 HS are the two fresh snappers which will soon be hitting the market, priced at $249.99 and $399.99, respectively.

Let us first talk about the SX400 IS model which is the entry-level variant. It presents you with a 30x optical zoom range and even possesses an Optical Image Stabilizer. It comes equipped with a 16MP CCD sensor, while its processing is handled by a DIGIC 4+ unit.

The Canon PoweShot SX400 IS features the ability to capture videos at 720p HD resolution while using the full 30x zoom range. An upgraded High Speed AF system is present on this camera as well, allowing the reduction of lag time for quick capture of images.

Coming to the higher-end PoweShot SX520 HS, it renders a whoping 42x optical zoom range. This shooter too grabs a 16MP sensor but it’s of the CMOS type. Powered by the DIGIC 4+ image processor, it can shoot 1080p full HD video while utilizing the entire zooming capability of its lens. Canon has installed a handy mini-HDMI port on the camera, and has granted it several advanced attributes such as Zoom Framing Assist, High Speed AF and more. 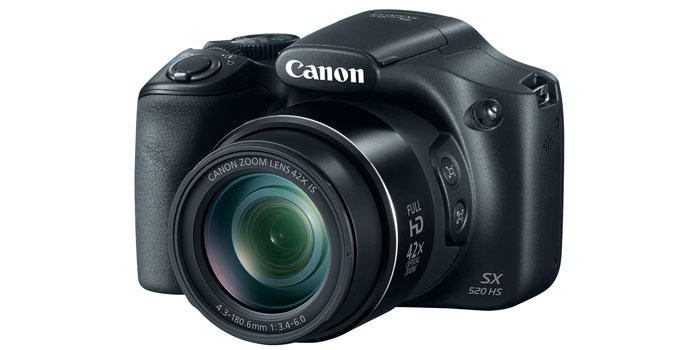 The company has revealed that while the Canon PoweShot SX400 IS will be released by it in August, the PoweShot SX520 HS will be seen hitting store shelves in the following month. Both will be available in black and red options.