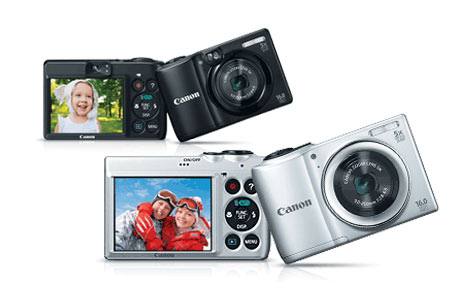 Updating its portfolio of entry-level snappers, a particular Japan-based manufacturer has recently unveiled 6 new Canon PowerShot A-series cameras. This refreshed range comprises of the PowerShot A4000 IS, A3400, A2400 IS, A2300 and A1300 as well as A810.

Housing a number of enhancements, the updated PowerShot A-series employs 16MP sensors, 720p HD video recording and 28mm wide-angle lenses. In addition to this, all models are expected to sport the Smart Auto function that’s said to provide 32 different modes for capturing images in various environments. The PowerShot A4000 IS camera features 8x optical zoom, whilst the PowerShot A3400 IS variant has 5x optical zoom. Fitted with genuine Canon lenses and OIS technology, both gadgets come bearing 3-inch LCDs. However, the latter flaunts a touch panel display. For the PowerShot A2400 IS, A2300, A1300 and A810 variants, Canon has slipped in 5x optical zoom capabilities along with 2.7-inch LCD screens. The latter two are equipped with an optical viewfinder and run on AA-sized batteries. For a much more intuitive experience, all variants come bearing a help button to help users conveniently access various shooting modes.