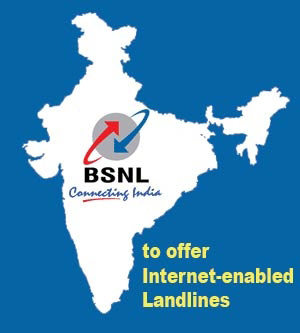 Telecom company BSNL, has announced that they will no longer offer stand-alone landlines. The company has decided to offer a broadband connection with every new landline telephone that it installs in India. The best part is that customers will not be charged a single Rupee extra for this broadband capability.

Also, BSNL customers will be able to activate the ‘high-speed’ Internet connection at anytime.

Eventually, BSNL plans to increase its broadband user base by 99.9%. Plans are also strong to extend these broadband-capable landlines to rural parts of India.

In the next step, BSNL will make all of its existing landline connections Internet enables.

A BSNL executive was reported as saying, “The process is expected to be completed by the month-end, after which any landline subscriber of BSNL can log on to the internet without taking a Sancharnet connection and thereby avoiding the hassle of registration or taking a separate subscription package for the internet. However, the speeds here will be that of dial-up connection – at 56 Mbps – and not at 256 Mbps as provided through a broadband connection.”

Apparently, BSNL had to resort to this move- which will be great for consumers- mainly due to lack of usage to save resources.

“We did not have server and storage space to accomadate these customers,” confirmed a BSNL executive.

Thus, you can expect your BSNL landline phone to be Internet-enabled by the end of October 2007. This new feature will be applicable throughout India.