So things are starting to get a bit confusing about what features the Samsung Galaxy S5 will have. Well, the latest benchmark details could help clear up the mess caused by numerous leaks. Two different models have been spotted of the smartphone, one with a 1080p screen and an Exynos processor and the other carrying a 2K panel along with a Snapdragon 800 SOC.

The first version of the Samsung Galaxy S5 is the SM-G900H that’s said to be headed to Europe. This model will carry an Exynos 5422 octa core SOC, the same one found on the Galaxy Note 3, and a 1080p display that’s most likely to be 5.2 inches wide. Other features of this device comprise of 2GB RAM, 16GB storage, Android 4.4.2 KitKat and a 16MP rear camera. There’s no information on whether the company will launch this variant with 4G LTE support or not. 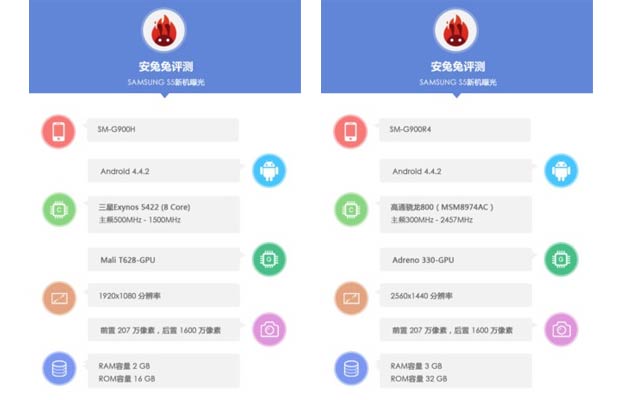 Then comes the SM-G900R4 handset, which is rumored to be the Samsung Galaxy S5 for US Cellular. According to data from the AnTuTu benchmark, this version suggests that potential buyers stateside will be treated to some pretty mouth watering features. They include a 2K 2560 x 1440p touchscreen, a 2.5GHz quad core Snapdragon 800 processor with Adreno 330 graphics, 3GB of RAM, 32GB of storage, Android 4.4.2 and a 16MP rear camera.

Samsung normally develops two models for different markets, 3G and 4G LTE. And it usually equips both models with the latest hardware so that they deliver the same performance. It’s quite interesting to see the company have two Galaxy S5s with such a wide gap in the specifications. The SM-G900H looks to be developed for emerging market or the company might just launch both models in all locations, creating a similar strategy as Apple did with the iPhone 5S and 5C, as Unwired View suggests.