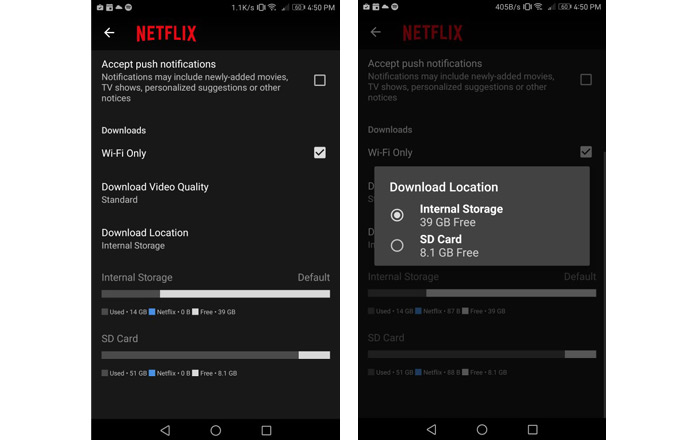 Netflix made a lot of people happy when it announced that it would allow people to download content offline. The streaming giant has now made things a bit easier for Android users who have a limited amount of in-built space by letting them save videos to their SD card.

Netflix for Android will now ask consumers where they want to save offline videos via a new Download Location option in the Settings menu. They can choose between Internal Storage or SD Card, prompting new permissions to be requested. The application conveniently tells them how much room they have on each and demarcates Netflix content in blue within a chart.

However, it should be noted that the fresh alternative is not available on all devices. Unfortunately, Netflix hasn’t disclosed which phones and tablets will have support for offline SD card storage. Moreover, downloaded content eventually expires no matter which preference is picked, so movies and TV shows won’t sit around forever.

To recall, Netflix let its patrons download stuff offline back in December last year. The feature was limited to only a selection of shows such as Stranger Things, Black Mirror and The Crown upon its launch, but has expanded to other titles in the time since.

Eligible films and TV shows showcase a downward arrow symbol next to the play button. Netflix’s move was seen as a positive step by many, potentially helping it to expand in regions such as India where internet connectivity can be unreliable.

You can download Netflix for Android via the Play Store.