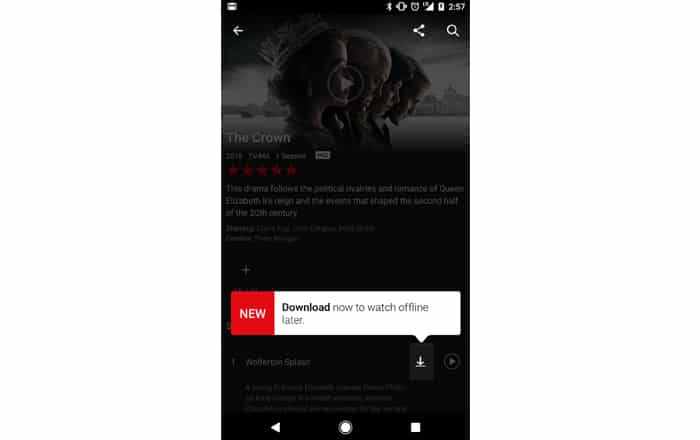 Netflix is finally giving its users the option to download shows offline, freeing them from being dependent on an internet connection to watch content. The highly-requested feature has been circling rumor mills for years and will now be available to members across the world.

Netflix thankfully isn’t restricting offline downloads to higher-tier consumers or charging an extra fee to access the service. It’s currently rolling out the feature in an update for Android and iOS devices. The downward arrow symbol for the feature will now appear next to the play button for eligible shows and movies.

Titles currently up for downloads include shows like The Crown, Narcos, Orange is The New Black, Stranger Things, and Black Mirror. The arrival of the option should come as welcome news to people who can now watch Netflix while travelling on a plane or to a country where Wi-Fi isn’t readily available or expensive.

The move may well serve to increase Netflix’s appeal in international markets such as India where connectivity can be spotty or non-existent, making it difficult to view videos steadily. The add-on could also help the company compete better against rival streaming services such as Amazon Prime which has had an offline downloading option for quite a while now.

You can download the latest version of Netflix via the App Store or Play Store. The company promises to expand the list of TV shows and films eligible for downloads in the coming days.