Netflix, the coolest way to watch movies online, has acknowledged the need for addressing people’s data consumption woes. The service’s addictive nature a number of times leads to people unknowingly running high data bills, and its makers have hence introduced new settings for its apps.

Both the Android and iOS apps of Netflix have been updated with new data limit management features. This means that the app will adjust the quality of the content based on the settings you choose, and also let you know how much data per hour will be consumed at that setting.

This is an entirely new approach for offering data management settings. A Cellular Data Usage option has now appeared in the Settings of both the Android and iOS Netflix apps. In this menu, choosing the Low option will let you watch about 4 hours of content and just spend 1GB of data. 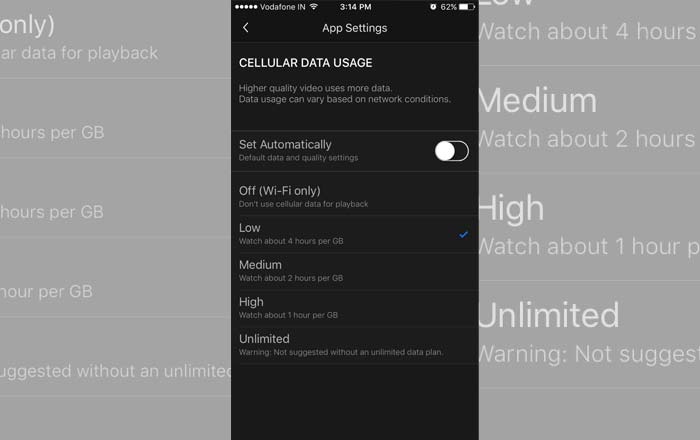 A Medium setting allows you to view 2 hours per GB, whereas the High option streams 1 hour per GB. The parameters have been beautifully explained by Netflix giving us a clear idea of just how much of our data is being consumed by it.

Two other settings also exist, with on among them being a Wi-Fi-only option and the other one being Unlimited which does not compromise quality at all. Netflix has warned though that data usage can vary based on the policies of every carrier.

Also Read: Netflix launched in India starting at Rs 500 only

The new data control settings are available on both the Android and iOS versions of the Netflix app. You can head over to the Google Play store or the Apple App Store in order to get these apps on your devices and start streaming.