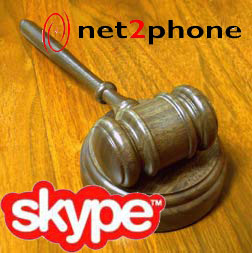 The Internet telephone unit of IDT Corp. Net2Phone has dragged Skype and its parent company, eBay Inc., to the U.S. District Court in New Jersey, charging the free VoIP network company of being involved in patent infringement. The suit centers on point to point IP technology, which allows for an exchange of IP addresses in order to establish a link between two devices. Skype uses the technology to make calls.

Skype is also the defendant in another patent suit filed in late May by the owners of the Morpheus network. In that suit, StreamCast Networks claimed Skype broke an agreement that gave it first right of sale to the FastTrack network protocol. The technology is the foundation of Skype’s Internet calling, and was used for file sharing in Morpheus.

They are seeking a permanent injunction in addition to damages. Both the companies have yet not commented in the media on this latest lawsuit filed against the market leaders in the VoIP segment. Skype spokeswoman Alicia Divittorio added that the company does not comment on litigation.