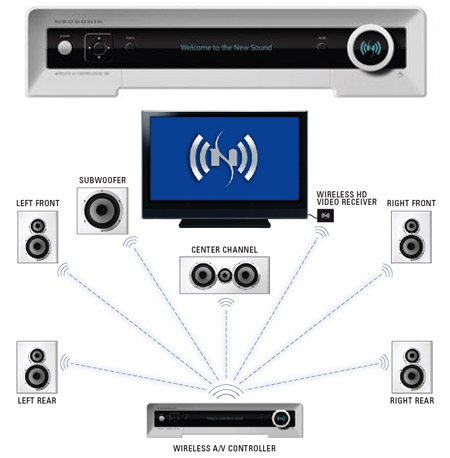 The core of the Neosonik digital wireless home theater system is the wireless A/V controller, which lets you plug in any digital or analog audio or video device, such as an HDTV, CD/DVD/HD-DVD player or VCR. There’s a variety of inputs and outputs including HDMI 1.3 which transmits them wirelessly at speeds up to 60 Mbps to the video receiver connected to your TV or, in the case of audio signals, to the digital wireless speakers that are sent wirelessly to Neosonik speakers. You can also purchase a unit with an optional HD Radio Digital AM/FM tuner Card.

Apparently, you’ll get up to 200 feet of range from the system, even through walls, letting you pump HD signals to multiple rooms in your house.

The Neosonik digital wireless home theater system is priced between $6,000 and $15,000 depending on the setup you go for.

Features of the Neosonik digital wireless home theater system are: