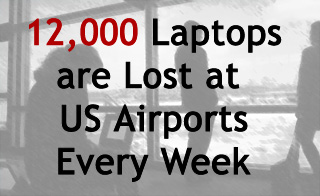 As many as 12,000 laptops are lost in a week on US airports, reveals a new report. A study carried by Ponemon Institute and Dell Computer has discovered that such a huge number of losses of laptops and eventually of data occur on US airports.

That’s not it the report further states that nearly 65% of the business travelers admit that they do not take any steps to protect the confidential information contained on their laptops while traveling. While other 45% said that they do not backup their data before starting for a tour.

“It’s staggering to learn that up to 600,000 laptops are lost in U.S. airports annually, many containing sensitive information that companies must account for,” said Larry Ponemon, chairman and founder of the Ponemon Institute. “IT departments must re-evaluate the steps they’re taking to protect mobile professionals, the laptops they carry and company data stored on mobile devices.”

Key findings of the study are as follows:

Moreover, study also brought into notice that most of the laptops are lost at security checkpoints, departure gates, airport retail areas, lounges, where it’s easy to leave behind belongings if traveler is in rush or carrying too many stuffs. So next time, be careful when you take a flight with your laptop. Don’t forget laptop bag anywhere.