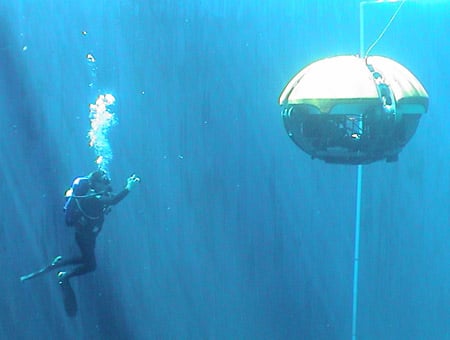 National Aeronautics and Space Administration (NASA) has found out a unique way to test the DEPTHX robot, which is being developed to find life on Jupiter’s icy moon, Europa. They are using the sinkhole El Zacaton that is situated near the Gulf coast of northeastern Mexico.

Sinkholes are basically natural depressions or holes in the surface topography caused by the removal of soil or bedrock, often both, by water. They come in different shapes and sizes. The Mexican sinkhole is out 100 meters wide and more than 1,000 meters deep. The researchers are aiming to use the DEPTHX robot to map and take samples in the dark, water-filled crevice.

The scientists hope that the two weeks spent in the sinkhole will give them inputs about the planned navigation of Europa’s ice-capped oceans in about 20 years. The moon, which is named after the king of the Phoenician city of Tyre, was discovered in 1610 by Galileo Galilei. Scientists have long speculated that Europa is a one of the most apt places in our solar system where primordial extraterrestrial life could exist.

John Spear is the microbiology expert at the Colorado School of Mines as well as a part of the NASA project. He says, “Plants, animals, fungus, microbes and bacteria are the known forms of life. But there may be additional branches to the tree on Europa. Learning more about life tells you more about our own legacy and the benefits in health and medicine that could bring.”

Texas scientist Marcus Gary dreamed of DEPTHX in 2001 at a barbecue, and his team got the NASA funding. The cost of the project is estimated to be around $5.3 million. El Zacaton was selected by Gary as he felt that its sheer depth could be used test out the robot’s mapping powers in untested waters. No one has ever reached the bottom of the sinkhole and an American diver died in 1994 trying to swim to the bottom.

NASA is now planning to take the probe to Antarctica in November 2008 as they hope the waters below the frozen ice would help them test the strength of the DEPTHX. They are aiming to send a smaller version of the 1.5 tonne robot to Europe in the next two decades.