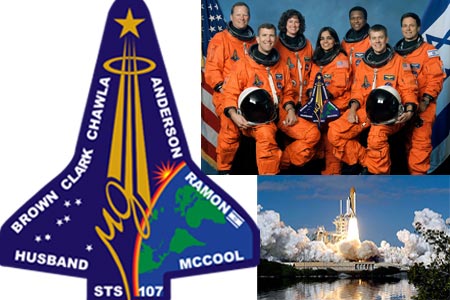 Many events have changed the way we have perceived science and our own quest to explore the outside world. One such event occurred five years ago but it was a very sad one.

On Thursday, the National Aeronautics and Space Administration (NASA) held an official Day of Remembrance. It was held to remember the crew of the space shuttle Columbia.

They also remembered the crews of the Challenger accident in 1986, the Apollo 1 fire in 1967 as well as others who died in the quest of space exploration. This public memorial service took place at the Kennedy Space Center Visitor’s Center in Cape Canaveral where agency officials, astronauts, dignitaries as well as family members of the Columbia crew were present.

Evelyn Husband-Thomas is the widow of Rick D. Husband, who was the commander of Columbia. During the service, she said, “I am amazed that it’s been five years. This morning I could not stop thinking about Rick and Willie, and Kalpana and Mike and Laurel and Ilan. All of our families went through so much that day. We so miss them and we will never forget them.”

After the Columbia disaster, an investigation committee found out that a suitcase-sized portion of foam that had broken off from the external fuel tank was to be blamed for the explosion. It had damaged the space shuttle’s heat shield along its left wing leading edge thereby making it exposed to the superheated atmospheric gases during landing.

But that was just the physical cause, as many investigators also blamed NASA’s internal culture, which played a part in the accident. But now it seems that NASA has learned its lesson from the Columbia disaster. The space agency is getting ready to launch the Atlantis in a few days. The space shuttle is flying to the International Space Station (ISS). NASA plans to launch up to six shuttle flights in 2008. Out of the six shuttles, five of them will be used for orbital construction.