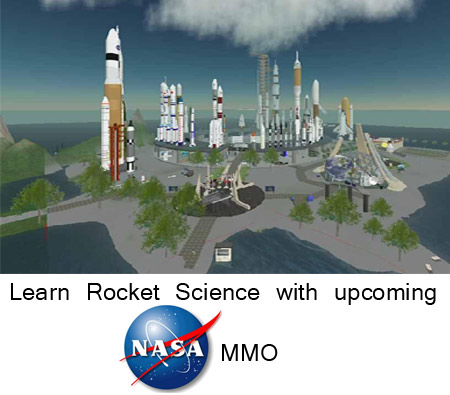 NASA is reportedly in the midst of creating a virtual world aimed at students- one which simulates real NASA engineering and science missions. NASA Learning Technologies’ Project has announced that it is developing an educational MMO game that will offer insight into the fields of science, technology, engineering and even mathematics.

At this point of time, there is a growing interest in social virtual worlds on the Internet, Massively Multiplayer Online games (MMO) and other such things. Naturally, NASA too would like to utilize these technologies as the space agency believes that virtual worlds with scientifically accurate simulations could be of great benefit to those who are learning.

Moreover, NASA already has a presence in the 3D virtual universe. In fact, the space agency owns an island in Second Life where people (avatars) who have an interest in space can meet, share ideas and conduct various experiments. This location is called CoLab.

Virtual worlds and MMOs could be the closest that one could get to the real-world, if you really think about it.

For instance, learners would be able to closely work with chemical reactions in living cells, practice operating and repairing extensive equipment and even experience microgravity- all in a virtual way no doubt, but it would surely help them to apply it exactly to real-life and practical problems.

According to NASA, the project that they are currently developing will function as a laboratory-like online environment in support of education. It will function as a visualization tool and double as a collaborative workplace. Simultaneously, NASA hopes to encourage people to learn by portraying it as a challenging gameplay experience, keeping the fun factor intact.

“A Nasa-based MMO could provide opportunities for students to investigate science, technology, engineering, and mathematics career paths while participating in engaging game-play,” said the statement released by NASA.