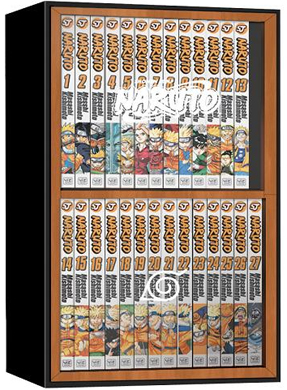 Looking for that perfect gift for a Manga-loving friend or colleague? VIZ Media has announced that as of today, the ultimate Naruto manga collection called the NARUTO Shadow Box Limited Collector Set is immediately available. Be prepared because this box set contains a number of exciting goodies.

The NARUTO Shadow Box Limited Collectors Set bundles all 27 volumes of the hit series’ first story arc. Also included are the final three volumes of the first story arc, which is great because these volumes will actually release only on December 4! And that’s not all; the box also contains a special mini-manga of the “proto-chapter” of the first NARUTO story ever published as well as a sneak peek of Vol.28, an exclusive two-sided color poster, collectible graphic novel cover stickers and a NARUTO trading card.

The 27 NARUTO volumes are housed in a special wooden display box that is individually numbered and emblazoned with the NARUTO logo.

According to Liza Coppola, Sr. Vice President, Marketing, VIZ Media, “The NARUTO Shadow Box Limited Collector Set is probably the most elaborate and comprehensive single manga box set ever published in North America and we are extremely excited to release it in plenty of time for the holidays.”

“The massive popularity of the manga shows no signs of slowing and this is the ultimate collection for any serious fan. The set is an ideal way to display the entire run of NARUTO and we’ve also included a host of extras that make this a real must-have this holiday season. We expect it to be a feature on many die-hard fans’ wish lists this year.”

Here is the list of contents that are bundled in the NARUTO Manga Shadow Box Set Limited Collector Set:

Interestingly, it is also known that VIZ Media will be launching the new NARUTO story arc in manga format in March 2008 which depicts the next stage of the saga about a boy training to become a ninja with the main character now three years older.

The NARUTO Shadow Box Limited Collector Set is available at select book retailers and also via VIZ Media’s online store for a price of $189.95, making it a perfect gift for NARUTO fans. But, you had better hurry because just 5,000 units of these NARUTO box sets have been produced.