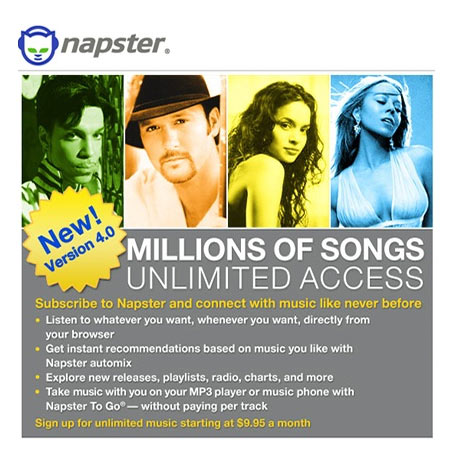 On Tuesday, Napster introduced Napster 4.0, a new Web-based version of its music service through which users can enjoy music on any computer without downloading the 15 MB software.

According to Napster, the latest version of its subscription service is compatible with PC, Mac and Linux systems that are operating the Internet Explorer or Firefox browsers.

Apart from listening to saved songs, on Napster 4.0, the service’s 770,000 odd subscribers can access albums and playlists online from its massive music catalog of 5 million tracks

Christopher Allen, Chief Operating Officer at Napster, stated, “With this new platform, Napster can easily be integrated into consumer electronics devices or integrated into other Web sites such as social networking sites.”

Users need to shell out anything from $10 to $15 a month to stream or download an unlimited number of songs from its humungous library. On the other hand, iTunes sells songs as permanent downloads at 99 cents each.

The other key features of Napster 4.0 are:

However to download songs, burn CDs and to move tracks to portable music players, users have to download the Napster software on a PC platform.