Google’s annual I/O conference is set to take place a month from now and we expect to see new hardware at the event including a Nexus 8 tablet made by HTC. While the development of the slate has been kept behind closed doors, an image on the event website shows an unknown slate which could just be the device in question.

Spotted by PhoneArena, the device could be just a placeholder tablet, but goof-ups do happen and the Mountain View giant has accidentally disclosed information on upcoming devices in the past through it websites. The Nexus 8 tablet is said to have an 8.9-inch display, putting it in direct competition with the iPad mini. The device shown in the image below looks to fit the bill and it looks quite different from the Nexus 7. 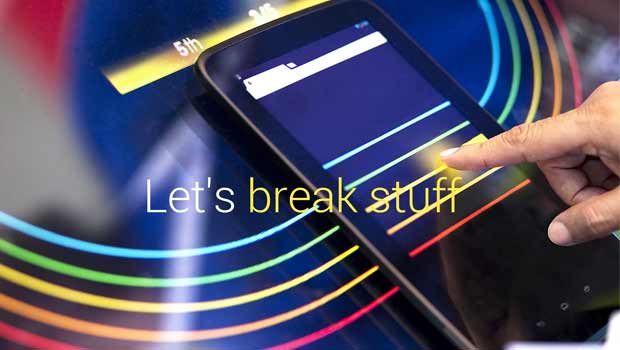 The device has pretty thick bezels surrounding the display. This makes us more certain that it isn’t made by LG considering that all of its new slates have slim bezels. Where hardware is concerned, the device could join the WQHD craze and have the latest components available in the market. Also, PhoneArena notes that Google will break tradition and go for a premium pricing for the upcoming slate.

The tablet could be the last in the Nexus range as the search giant will reportedly end the program in favor of its upcoming Android Silver project. The first phone in the series will be made by LG and have a Qualcomm MSM8994 chipset which is said to be designed with an octa core configuration and 64-bit support.

The Nexus 8 is rumored to have a Q3 release, so Google’s I/O conference is the best platform for launching what could be the last in the Nexus program.