South Korean brand Pantech is up to something big it seems, for an unannounced device named IM-A888S has been spotted in the wild bearing extremely high-end specs. This handset is expected to form part of the company’s Vega range and so far, we don’t know anything official about it.

GSMArena has spotted the device in the AnTuTu database bearing the Android 4.4.2 KitKat OS. A big surprise is that it grabs the ultra-powerful Qualcomm Snapdragon 805 SoC which is accompanied by an Adreno 420 GPU. Its display features a 2K resolution of 2560 x 1440 pixels, but its size and pixel density are unknown. 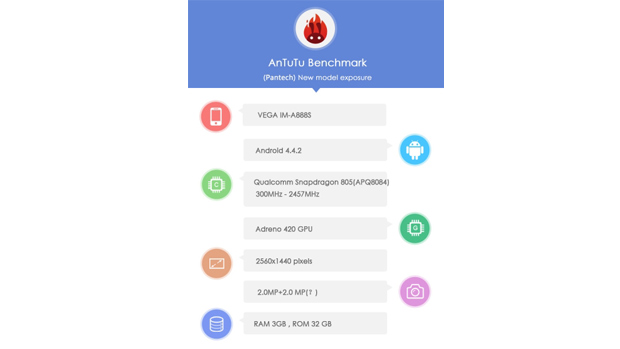 The benchmark image says that this phone kicks in dual cameras of 2MP in capacity. This could either be an error or it could also mean that Pantech is prepping up something along the lines of HTC’s Ultrapixel camera. Our bet is on the former possibility.

Lastly, there’s 3GB worth of RAM present on this mystery smartphone, apart from 32GB of storage. The current flagship of Pantech is the Vega IM-A880S which is a Korea-only deal. The mysterious IM-A888S too is not expected to be sold outside its home territory.

Here’s a neat look at its leaked specs: