Making the rounds currently are speculations about a newly spotted Samsung SM-G110 smartphone which seems to be grabbing a 3.3-inch display and the Android 4.4 KitKat OS. This sort of software boost is quite a rarity for a device with such a small screen and presence, but fresh leaks have suggested just that.

The Samsung SM-G110 was spotted in transit on Zauba.com by SammyToday. Moreover, the website also managed to pull a user agent profile of the handset. Although nothing can be said as of now, it could be that the mystery gadget will grab the Pocket branding. 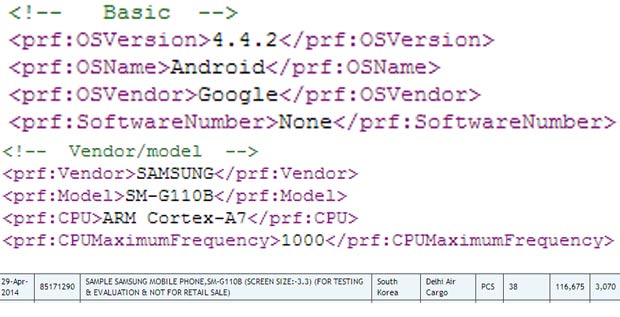 Samsung has been releasing extremely low-spec’d smartphones under this moniker since a long time now, and this could be yet another entry to that lineup. The 3.3-inch display on the SM-G110 apparently grabs a resolution of 240 x 320 pixels.

The device is said to have been equipped with a 1GHz processor featuring the ARM Cortex-A7 architecture. It has supposedly been sent to India for testing, which is logical since it’s a huge market for low-end handsets that are targeted towards first-time smartphone buyers.

Whatever this mysterious Samsung SM-G110 is, we’re sure to hear more about it in the near future, so stay tuned.

This is all we know about the leaked specs of the Samsung SM-G110 right now: