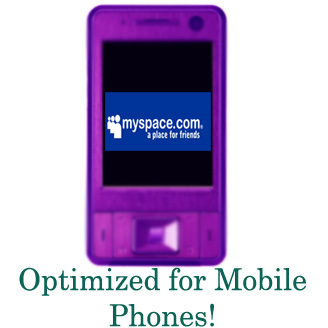 The multitudes of MySpace addicts out there will now be able to get their daily dose a bit easier now, for the hugely popular social networking site will be launching a free version optimized for mobile phones.

MySpace for mobile phones will be available from today onwards on any Web-enabled mobile phone or PDA. It will no doubt be a scaled down version of MySpace. However, MySpace users will be able to update fried requests, post messages, comment on photos, post bulletins, update blogs or just browse around the site for friends.

Previously, mobile MySpace users had to shell out around $3 per month to access a phone-friendly site. Now, since MySpace for mobile phones has officially been launched, it is free, but will earn revenue in the form of advertisements.

However, users will be subject to advertisements provided and powered by Baltimore’s Millennial Media. Initially, advertising will take the form of sponsorships and banner ads that can be clicked on.

John Smelzer, senior vice president of mobile at Fox Interactive said, “Accessing the Internet from your mobile phone will soon be as common as text messaging and voice calling.”

You can access MySpace through your mobile phone using this address http://mobile.myspace.com/