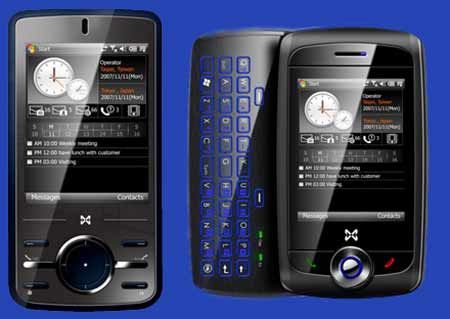 After a variety of mobile phone giants like Nokia, Sony Ericsson, LG, etc, here’s introducing the latest entry in the mobile market – Mobile and Wireless group (MWg). The company shouts out to the masses with a fresh stock of two new phones which give a professional look with a dash of stylized looks as well.

MWg has proudly launched their first phones named Atom V and Zinc II. Both the phones come packed with features which are suitable for professional requirement and can entertain as well. Here’s carefully screening the technical specifications of each of the phones.

The Atom V phone features a presentable 2.8 inch TFT QVGA touchscreen display with a clear resolution of 240×320. The phone has a decent 2.0 Megapixel CMOS Auto-Focus camera which runs smoothly on a memory of 64 MB SDRAM, 265 MB Flash ROM and stores a huge amount of data on the MicroSD expandable memory which accepts up to 8 GB of data. The phone provides a talktime of 3.5 hours through its Li-Polymer battery. Surf through GPS facilities with the Atom V’s SiRF Star III GPS receiver and transfer data easily using its Bluetooth connectivity. The phone supports Quadband GSM, 3.5G HSDPA, WCDMA, EDGE and smart Wi-Fi (802.11b+g).

The Zinc II on the other hand slides its QWERTY keypad and also proudly shows off its 2.8 TFT QVGA touch screen display featuring a 240×320 resolution. Even the Zinc II possesses a 2.0 Megapixel CMOS Auto-Focus camera with 4x zoom. The phone runs on the Samsung 2442 processor clocked at 500 MHz, 64MB SDRAM and 256MB NAND Flash ROM. The Zinc II offers a higher talktime of 4-6 hours via its 1,530mAh Li-polymer battery. This phone also supports a variety of features such as Quadband GSM, HSDPA, WCDMA, GPRS, EDGE, Wi-Fi (802.11b+g), and Bluetooth for connectivity teamed with an inbuilt SiRF III Star GPS chipset.

The phones will present themselves to India via TouchIndia Telemarketing and the phones price themselves so high that they are all set to tear the pocket off. The Atom V is priced at Rs. 27,888 and the Zinc II presents a price tag of Rs. 34,888.