The MTS Blaze 4.5 might’ve been infused with quite an outdated version of the Android OS (v4.1.2), but it has more than made up for that in the hardware department. This new smartphone which is priced at Rs 9,999 comes equipped with a Qualcomm Snapdragon S4 chipset and 1GB of RAM which is quite rare for a device bearing such a low cost.

It grabs a 4.5-inch touchscreen display just like its name suggests. This monitor is able to showcase its visuals with a resolution of 480 x 854 pixels. The MTS Blaze 4.5 even grabs a 5MP rear camera and a VGA webcam for satisfying users’ imaging, video shooting and video chatting needs. 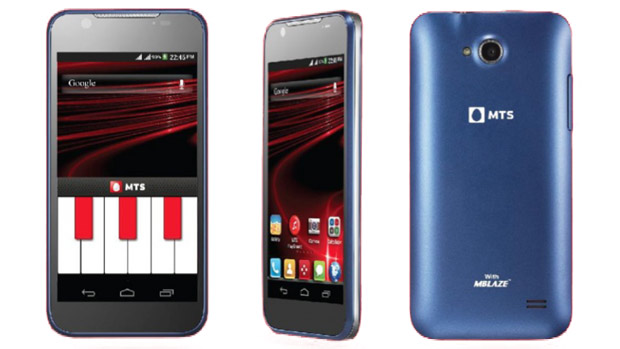 Its above mentioned Qualcomm Snapdragon S4 chipset features a 1.2GHz quad core CPU. Apart from 1GB worth of RAM, the MTS Blaze 4.5 even grabs 4GB of internal storage as well as an expansion slot for inflating the internal memory further up to 32GB. A 1600mAh battery finds its way into the MTS Blaze 4.5 as well.

This dual SIM handset offers support for both GSM and CDMA networks, appealing to the rare crowd which demands both these options. Although it kicks in the Android Jelly Bean OS, the fact that it’s version 4.1.2 wouldn’t bode well with some who at least expect their budget smartphones be possess the 4.2.2 edition, especially since these devices rarely get any updates.

The MTS Blaze 4.5 has been put up for sale without an official announcement. It can be bought through Think of Us at a price of Rs 9,999 which will also net you 100,000MB of data for a year if you stick to MTS as your network provider.