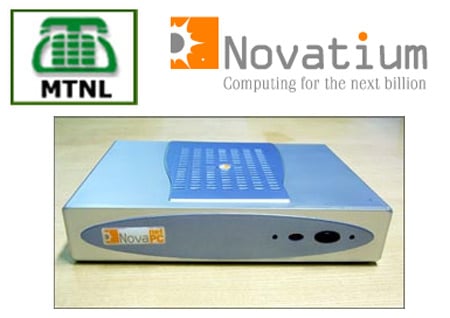 If you cannot afford to buy yourself a computer to get hooked up to the Internet, this could be an option for you. MTNL customers in India will soon be able to buy a PC for a price as low as Rs.4500 which includes an Internet connection for a just an affordable monthly fee.

MTNL has entered into a partnership with Chennai-based smart computing solutions provider Novatium to launch this low-cost access device.

Novatium has called low-cost device netPC and will be launched by Communication and IT minister A Raja initially in Delhi.

The Novatium netPC is a ‘no-frills’ computer which means that most of the hardware found on usual PCs will not be integrated into the device. But, it will also look and function like any other desktop.

All applications including the storage of data of all MTNL customers will be done by the centralized server in the locality.

In simple words, Novatium and MTNL will together sell computing as a service against the traditional model where the customer buys the device and then takes a connection from a telecom company or Internet service provider for access to the Internet.

The best part about the netPC device is that customers do not have to face the challenges associated with a regular PC. Obviously, the device’s USp would be its low cost of ownership, low maintenance and only server end system upgrades that would not get obsolete quickly.

This means that since the entire network is routed through a centralized server, customers do not have to worry about hardware and software costs as well as upgrades.

On the company web site, Novatium has explained the whole concept saying: “The netPC reaches to one’s home on a network cable just like a cable television service or broadband. Metro-ethernet deployments are quickly becoming a pervasive reality, and hence instead of just the internet broadband to your home, one can ask for a complete desktop with inbuilt internet access, educational packages, online games, chat, webcam, productivity suites and much more only served on the Nova netPC.”