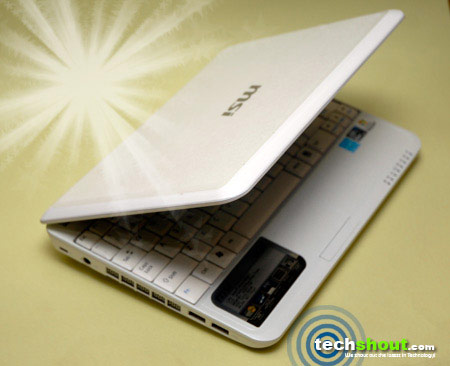 Call them mini notebooks, ultra-portables or just cheaper and smaller versions of laptops – the netbook has arrived. Most gadget enthusiasts will tell anyone who’s listening that these compact devices mainly serve basic computing purposes as also enable access to web applications, but cannot be used as a main computing system. But that doesn’t seem to have watered down the peaking consumer interest in netbooks. A number of companies such as Asus (remember the Eee PC 700?), Dell, Acer, HP, Lenovo and others have let out various netbook offerings into the market in the past.

MSI has wafted in with a number of offerings in the Wind array like their Wind12 U200 and U230 laptops over the past few months. Their latest addition to this family is the U130 that comes powered by an Intel Atom N450 processor and a Windows 7 Starter Edition. The UMPC market may seem crowded with a variety of choices, but a breath of fresh air is undoubtedly welcome anytime. We managed to get our hands on MSI’s newest netbook in order to give a…well, hands-on review to readers or those mulling over purchasing it.

It is available in black and white colored models and we laid our hands on the white one. Neat and compact but not edgy enough, are the first inescapable details about this netbook’s chassis. Apart from a Kensington lock hole, the exterior hosts three USB 2.0 ports, a D-Sub port and one mic-in, headphone out, RJ45 and card reader port apiece. The last-mentioned is cited to proffer SD, MS, XD, SDHC, MS PRO and MMC compatibility. Did we get any greasy fingerprints on it? No, we did not. That’s because we’ve never really had a chance to fraternize with people who prefer using their laptops with grease-coated fingers. Among those who think dirt or fingerprint-covered everyday gizmos are inevitable, we could be a minority of one and proclaim no grouse against such.

Open it up and the device is barely distinguishable from the Wind U100. There are eight LEDs for indicating num lock, caps lock, scroll lock, hard disk/optical drive device use, battery level, power on/off/suspend, WLAN and Bluetooth statuses. Basically, owners are extended 10/100 Ethernet LAN and optional supported WLAN, WiMax, Bluetooth as also 3G/3.5G connectivity. The netbook integrates an ArcSoft WebCompanion 3 webcam that offers 320 x 240 QVGA resolutions which may be called unflatteringly clear or flatteringly so depending on the user. Choosing from different frames and masks for mugshots was quite entertaining with three editing options besides Auto Enhance being available. 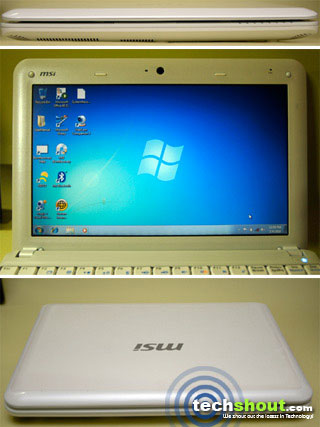 The 10 inch anti-glare WSGVA LCD somehow seems to be just right-sized for a netbook, not large enough to pose as a regular laptop’s and not small enough to disappoint us over the size of videos being viewed. And YouTube videos, we did watch for a long time. It was over five hours before the six-cell battery that powered the U130 drained down to 17%. The ventilator designed to cool the system did its job efficiently and left the netbook feeling only slightly warm in spite of the number of applications and games we ran on it. The two in-built stereo speakers can’t really be described as powerful and the sound quality doesn’t seem to satisfy the aural senses, until a pair of headphones is connected to the device, that is. Richard Stoltzman’s ‘Maid with the Flaxen Hair’ sounded enjoyably crisp and clear through the headphones.

MSI’s new arrival that was tested by us possessed a 2.5 inch 250GB SATA HDD and 1GB DDR2 memory. It houses an Intel Atom N450 processor that extends 512KB L2 cache and the Intel NM10 Express chipset at its core. The internet browsing experience was impeccably smooth and speedy, though the keyboard with touchpad requires users to expend some time before getting the hang of it. Some might surrender to the temptation of attaching a mouse to operate it and that’s not really telling negatively on this gadget’s functionality. ‘To each his own’, as they say. But we rather like touchpads which allow for switching from keyboard buttons to the ‘square-ish’ tactile interface easily without needing to reach out for a mouse. The Quick Launch (Fn) buttons lets users adjust the volume, activate webcam, launch Eco Engine, increase or decrease LCD brightness and more.

It doesn’t seem necessary to elaborate much on the games we played on it comprising of several online racing titles and pre-loaded games like Purble Place, Minesweeper, Hearts and so on. The visual graphics are quite good and the screen may be tilted back to an almost 140° angle. We ran the gizmo in full high performance and in the brightest possible mode. The power management attributes of this netbook lets users switch to Eco Power Saving mode. But as we discovered, this has a noticeably dulling impact on the screen. Options such as Sleep mode lets users keep the running session in memory and put the device in low-power state for quick resumption of work. Alternately, closing shut the netbook without turning off the system sends it into Sleep mode anyway. The Hibernate option saves a session on turning off the diminutive gadget and restores the same when it is turned on later.

The Energy Star-ratified Wind U130 comes with a Windows 7 Starter Edition. It tips the scale at a cool 1.2kg, with the included power AC/DC adapter and AC power cord hardly adding to its weight. The dimensions read at 260mm x 180mm x 19mm-31.5mm. The power button glows blue when the netbook is turned on. Its battery-indicating LED shines green when fully charged, amber when low and goes out when fully charged or the AC adapter is disconnected. It blinks amber if the battery fails and a new battery is required to be used with the device. The other indicators glow green while displaying the relevant functions being performed.

Pros: The Wind U130 may not sport a stunning exterior but its light weight and compact chassis deserve a fair mention. We appreciate the amount of running time the battery allows before draining out. The web browsing we enjoyed was smooth and without any lags. Also, MSI got it right with the LCD size and visual graphics which are not bad at all.

Cons: The Wind U130 could do with a more flashy and suave exterior… maybe a splash of color. We’d like to see better in-built speakers too. Those who insist on having fingerprint-proof devices may be left disappointed by the exterior. The 1.3MP in-built webcam seems to beg for an upgrade too, not that it was difficult to recognize our faces through the camera we might add.

The Rs.23,000 price tag may not seem all that heavy for MSI’s Wind U130 to those on the look out for an ultra portable computing system. It comes with an optional carry bag too. We like it. According to us, an 8.5/10 rating fits the bill for this UMPC by MSI.