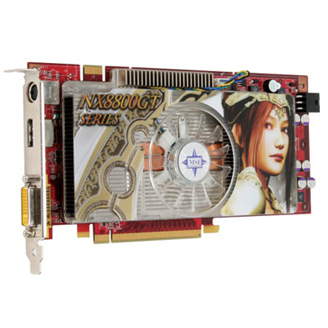 MSI, a manufacturer of computer products has the NX8800GT-PTD1GE Series graphic card. Based on the NVIDIA GeForce 8800GT Series GPU, this graphic card is capable of DisplayPort output and offers an increased onboard graphics memory of up to 1GB (1024MB), offering the smoothest high-definition gaming experience ever.

DisplayPort is the next-generation I/O interface which is best suited for high resolution flat panel displays. MSI’s NX8800GT-PTD1GE Series also has an integrated audio signal. Now, the DisplayPort protocol further pulls in the auxiliary channel (which lets other peripherals like the USB HUB, webcam and touchscreen devices share the same cable with video/audio signal) to make the signal cable as less as possible.

Since the NX8800GT-PTD1GE Series offers plenty of memory space, it can be utilized as frame buffer and more texture resource can be read and written without extra latency. This is what makes PC gaming in extremely high-definition possible using MSI’s latest offering.

Further, in order to given ‘power’ users more benefits on over-clocking and advanced tweaking, the MSI NX8800GT-PTD1GE graphic card loads with MSI’s 1-slot, dual-pipe high efficient thermal solution known as the X-type Fan-pipe. With this single slot fan, the GPU temperature can be lowered to around 60 degrees (as the ambiance temperature when at 25 degrees makes the GPU fully loaded).

Vincent Lai, director of MSI’s Global Marketing Group, “You can expect that there will be more high resolution flat-panel, DisplayPort capable display devices hit the market in the year 2008.”

“At that time, most graphics cards in the market will not bring the scene into full play at a reasonable frame rate. So, if you want a smart buy for HD gaming, movie playback and also with DisplayPort supported, MSI NX8800GT-PTD1GE Series is definitely your only choice,” he added.