MP3 Players could now be Equipped with 500,000 Gigabytes Capacity! 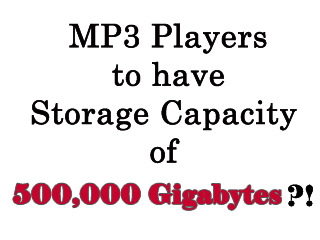 What if you get as huge a memory as 500,000 gigabytes on your MP3 player. Yes, it might come true in the future. Currently Apple’s iPod Classic is the highest capacity model featuring a storage capacity of 160GB.

Scientists have developed a molecule-sized switch, which would increase the storage capacity of the music devices by 150,000 times. This switch would allow nearly 500,000 gigabytes to be squeezed onto one square inch.

Currently the limit for a similar space is around 3.3 gigabytes.

This king-sized capacity switch has been developed by Professor Lee Cronin and Dr Malcolm Kadodwala at the University of Glasgow.

This switch is made up of two clusters of molecules, just 32 millionths of a millimetre apart, which allows to manipulate an electrical field.

By just placing this switch on a surface made of gold or carbon, up to a billion transistors can be fitted on to a single chip, more than five times the existing limit, claimed scientists.

By this way, the switch will expand the capacity of MP3 players. The new breakthrough concept was reported in the Nature Nanotechnology journal.