Mozilla TV streamer pops up unannounced, expect it to be a lot like Chromecast

The Mozilla Firefox OS isn’t something that’s spreading like wildfire, but it’s seeing a steady rise nonetheless. This has perhaps convinced the company to infuse it into a TV streaming stick much like the Chromecast and release it as an alternative to the popular Google product.

Although the device is still to be made official, we’ve come across a video which demonstrates how it works. Released by GigaOm, this clip showcases the fact that this Firefox OS-based stick is currently able to connect to Chromecast-enabled apps. 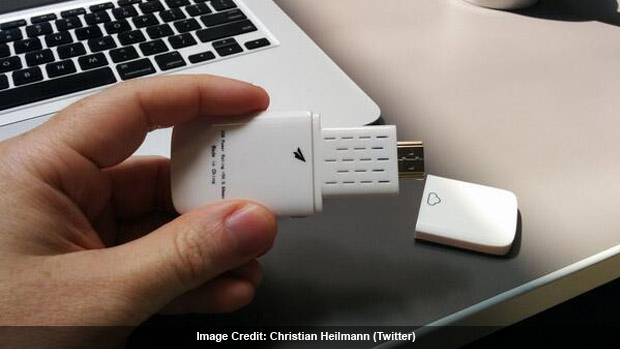 While ‘Casting’ is what Google prefers to call the process of pushing videos from your smart devices and computers to your TV screens, Mozilla has replaced that word with ‘Flinging’ for its new product. The process and its benefits however are the same, unsurprisingly.

The Google Chromecast is also able to showcase media from the Chrome browser onto your TV screens. And this Firefox OS stick shouldn’t lag behind in that department as well. Of course, the Mozilla Firefox browser will be needed by its users for utilizing this feature.

It can be noted that all apps that can connect to Google’s dongle can connect to the unit that’s pictured above which was tested by the aforementioned site. In the video they’ve released, YouTube playback can be seen appearing normally, but that’s a strange user interface for something that doesn’t have a remote control to tag along.

We’ll try to dig for more about this Firefox OS TV streaming dongle and will report to about additional details when they’re out.