Its new Lightbeam extension is Mozilla’s attempt at providing some respite to the large number of folks in the world who’re uncomfortable with the idea of someone spying on their Internet activity. In wake of the recent PRISM controversy, Internet spying has become something that really does creep out users of the World Wide Web, and thus, Lightbeam becomes an important tool.

There are a number of websites which keep an eye on your browsing habits in a bid to deliver streamlined experiences or suitable advertisements. For either of the two tasks, truth is that your actions are in a way being spied on. Mozilla Lightbeam is hence aimed at providing you with an in-depth analysis on the who and what of this business. 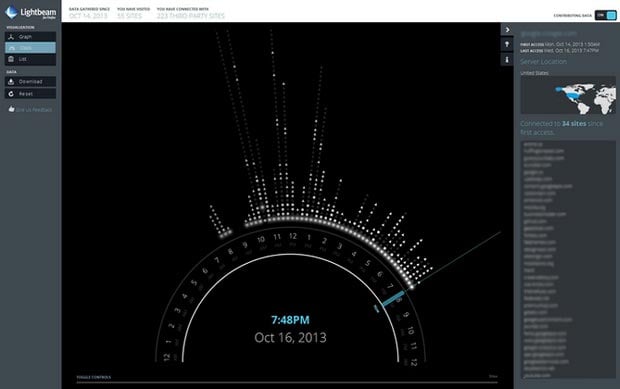 Released last week, this extension has been made available by the company free of cost. One of the highlights of this program is its visuals-based approach towards the whole affair. Data is provided to you by means of a beautifully crafted interactive interface.

Mozilla Lightbeam basically unearths the third-party companies which are watching your online activity. It then showcases this data on a solar system-like visualization of concerned sites and other services which are making a bid of grabbing data related to your browsing habits.

Mozilla has explained that the Lightbeam project began its journey back in 2011, when software developer Atul Varma, created an experimental add-on in order to visualize browsing behavior and data collection on the Web. Over the following months, the project started taking shape and more people eventually got involved. And now, it’s finally ready to be released for the public.

Those wishing to test it out can head over to this link and download the Mozilla Lightbeam add-on for their browsers.