Mozilla Firefox 4 Review: A powerful browser in the making 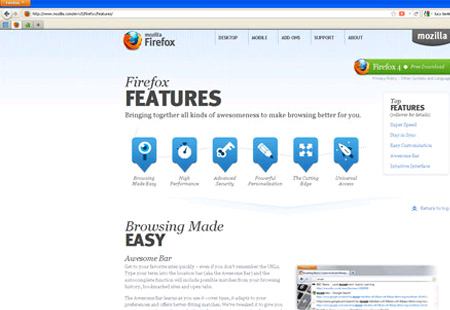 So the Mozilla Firefox 4 is out and we’re wondering what the big deal about web browsers is anyway? They’re only here to make life easier for internet users, right? But those who spend eons of time rambling through the virtual world seem to care a lot judging by comments posted across the web about some browser or the other. We might venture to say that Internet Explorer has always been the most used web browser by default due to the fact that it’s been coming with Microsoft’s Windows OS since forever through a large part of the PC revolution time zone. But there were always going to be cult favorites and when Firefox seemed to rise like a ‘Phoenix’ from the ashes, a lot of people started checking it out. Firefox is the second-in-command when it comes down to browser market share wars at present. Our fresh review of Mozilla Firefox 4 for Windows should give you a better idea of what makes the browser tick for the large number of users who resort to it in order to access the web. 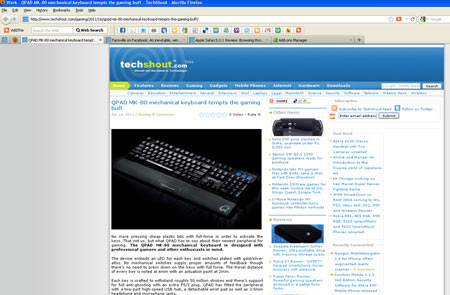 Firefox 4 is a 12MB file which takes under a minute to download and a few more insignificant seconds to be installed. IE9 happens to be a 17.2MB file and Microsoft has overlooked Windows XP users while launching this browser version. Mozilla Firefox 4 works with Windows, Mac and Linux. As soon as the browser pops open, it’s easy to see that everyone in the browser business has been taking tips from each other in terms of design. Crowned by a dark blue border at the top, the entire interface is extremely neat. By default, it’s not as sparkling as Safari and even untidier than Chrome. But look at it this way, not everyone is web savvy and there are those who feel positively helpless when faced by a stark browser like the one Google has to offer. A quick tour of the reworked interface takes us through tabs placed above the URL bar by default, a refurbished add-ons manager, the ability to pin tabs as apps for a more polished appearance and so on.

While Mozilla Firefox 4 does include the Private Browsing feature, it’s not a foolproof way of keeping others out of your browsing history since there are ways for sites, your internet provider or heaven forbid, your boss, to find out just what you’ve been up to. But it’s still a useful utility for those who’d prefer not to have cookies, cache files, passwords and similar things saved for the future. The browser manages to crash on us by the time we have twelve tabs open. It would’ve been nice if we could find a way to detect the troublemaking site based on CPU usage and close the tab when necessary. Chrome proffers this in the form of Task Manager in the Tools section. Our grouse with Firefox is that you may ask it to surface an alert when multiple tabs are slowing it down through Options in Tools, but that doesn’t mean you’ll actually be warned and a crash is always to be expected. 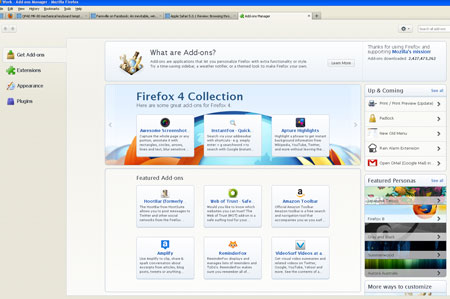 We taste the bitter pill upon innocently downloading the add-on in question after being led in that direction by the Bookmarks button. When it comes to add-ons, the Firefox 4 developers don’t seem to be exchanging notes properly. For one thing, we found Xmarks Sync in two unlikely places – in the ‘Featured Add-ons’ section unfurled from the ‘Get Bookmark Add-ons’ option in the Menu bar and on Mozilla’s wall of shame which shows the top few slow performing add-ons. Interestingly, Xmarks Sync appears to among the most downloaded plug-ins, with the weekly number of downloads reaching 82,038 when we last checked in on it. According to the Mozilla page dedicated to slow-performing add-ons, installing Xmarks Sync can cause the browser to get sluggish and it has an almost 30% impact on how long Firefox takes to start up. This was almost three weeks ago and like the fickle friend that notoriety is, other trouble-making add-ons have now toppled it out of this position.

Take courage, for today’s browsers are clearly meant for customization to the hilt. The trick is to avoid the celebrities featured on the aforementioned page like the plague and shop for others through Add-ons in the Tools option. This also happens to be the place you should be heading for while in search of the Plugins segments to disable add-ons. There are a host of attractive software apps like Add This and Awesome screenshot to choose from apart from numerous other ways to personalize Firefox. The ability to sync history, passwords, bookmarks and open tabs across devices is a nice touch. When we’re hitting out stuff in the Awesome Bar and absent-mindedly looking for a site already open in the browser, the ‘Switch to Tab’ pops up and lets us navigate to the sought after page with a click. 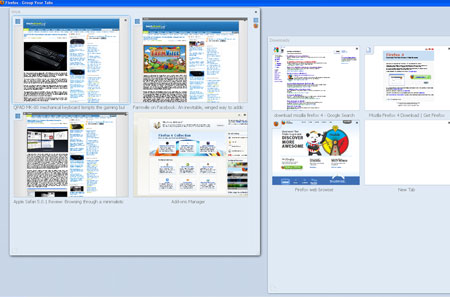 A really useful addition is ‘Tab Groups’ for power users who regularly throw open an inordinate number of sites and need to bunch them into well-ordered categories like ‘Work’, ‘YouTube Videos’, ‘Paris Hilton Bloopers’ and so on. But it would have even better if you could preview the pages in a sort of magnified view when you hover over them while they’re huddled together in the respective categories. One of the most practical things about the browser is the ability to tag bookmarked items with one or more words. Say, we frequented food sites very often, then double clicking on the Bookmark icon on the location bar offers a ‘Tag’ facility too. Marking the starred website with one or more words like ‘Food’, ‘Recipes’, ‘Cuisine’ means that the next time we want to reach that particular domain, hitting out any of the tags in the location bar drops down the relevant site. More than one portal can be invoked with the same tag.

The much needed design overhaul does not ignore traditionalists who may prefer the older layout which lets you reach everything from one place instead of pecking at the layers of drop down lists. Everything is customizable according to user preferences.

It’s much speedier than previous versions and Tab Groups as well as the App Tabs are handy utilities.

Mozilla ought to do some serious homework on the way add-ons reach people or there’ll be dozens of users abandoning ship without the least idea that it’s some of the plug-ins which cause browser trouble.

On the whole, Mozilla Firefox 4 is an excellent browser in terms of speed and the appearance is much tidier than previous iterations. It gets a 9 out of 10 rating from us taking the performance and speed into consideration. That being said, Mozilla has served up nothing revolutionary when it comes to either design or features. It’s yet another browser losing itself among the other good looking ones and there’s no reason to expect anyone to miss it if say, a UFO beamed up all the folks at Mozilla and flew away into the far reaches of the galaxy.