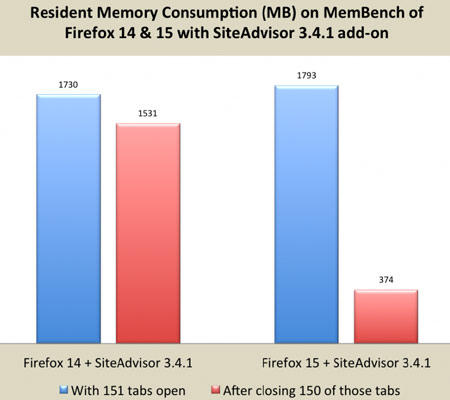 Memory leaks through add-ons seem to have been a problem with Mozilla’s web browser for a long time now, though it could all change with Firefox 15. This release is the beta version of the upcoming software which aims to reduce the application’s memory consumption sans any modifications to add-ons.

Memory leaks are caused when the memory engaged by a program isn’t released when not required. This is normally seen in most versions of Firefox where the RAM consumption generally goes through the roof. For most users who have add-ons enabled, the application could slow down, freeze for a substantial amount of time or even crash. Disabling add-ons and restarting the browser acts as a fix, but not as a permanent one.

“Over the past year, Mozilla has made great progress in reducing Firefox’s memory consumption. However, the excessive memory consumption caused by add-ons with memory leaks has remained an ongoing problem. Firefox 15 fixes that problem. We have confirmed, via in-house testing and from real-world telemetry data that it prevents the vast majority of leaks that occur in existing add-ons. Users who upgrade to Firefox 15 won’t have to upgrade their add-ons to see the benefits,” explains Nicholas Nethercote, through a post made on the official Mozilla blog.

On the bright side, most add-ons have been fixed by their respective developers. However, Mozilla doesn’t seem to be fully satisfied as a wide catalog of untreated add-ons still exists. To fix the problem, engineer Kyle Huey presented the idea of simply detecting the zombie compartments and cutting them off. The outcome is that the resident memory consumption is 4.8x smaller in this beta release compared to that of Firefox 14.

The Firefox 15 web browser is currently in the beta stage and can be downloaded through the ‘Try Firefox Beta’ link on the company’s website.