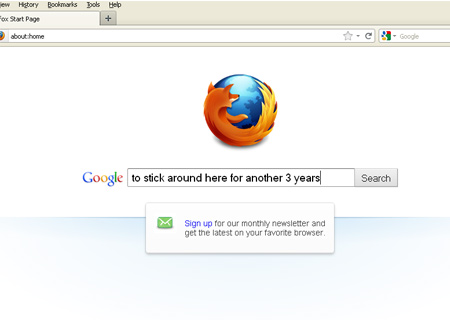 Google has been the default search engine in Firefox for quite some time now and it appears that the guys over at Mountain View are pretty much at home within the open source web browser. In a recent announcement made by Mozilla, both companies are most likely to maintain their current agreement through which Google will continue its duties as the default query finder. Well, at least for the next three years or so.

This information was revealed through the official Mozilla blog which stated that the newly renewed agreement to affix Google as the default search provider within the browser will be in effect for a minimum of three years, after which both companies are required to refurbish the contract once again. It’s obvious that the search giant has shelled out a substantial amount to finalize the agreement, though we’re not being given any details along these lines.

“Mozilla has been a valuable partner to Google over the years and we look forward to continuing this great partnership in the years to come,” commented Alan Eustace, Senior Vice President of Search, Google, while talking about the deal.

Neither Google, nor Mozilla have disclosed the terms of this agreement, while ducking under the statement that the T&C are subject to traditional confidentiality requirements. Previously, the developers of the open source web browser let loose their Firefox with Bing addition which makes the default search engine set to the one developed by Microsoft. It’s unclear whether the company will continue to offer this release. And if they do, what does Google have to say about it?

At any rate, web users who depend on Mozilla need not worry about the possibility of having to give up Google in Firefox for the next three years.