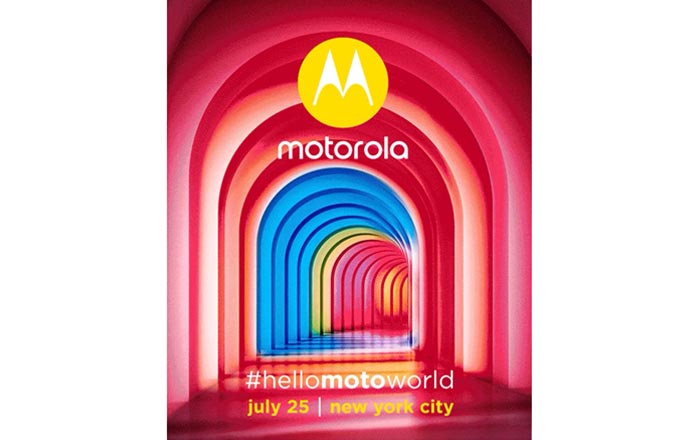 Motorola’s ready to show off some new Moto goods, sending out animated GIF invites for a July 25 event being held in New York. The invitation is pretty cryptic, revealing very little about what might be unveiled at the occasion.

First of all, it’s been captioned with the hashtag #hellomotoworld, indicating that this is a global launch and not a US-specific one. Motorola’s also telling attendees that they ‘won’t want to miss this.’ All this is set against the backdrop of a mysterious rainbow tunnel that gets illuminated with red, green, orange, blue, yellow and pink light.

The most obvious conclusion to draw would be that Motorola is planning to launch a very colorful series of phones. Another theory is that it’s looking to announce some new Moto Mods that are unlike any which have come before it.

Also See: Moto E4 Plus coming to India on July 12

On the smartphone side of things, the smart money is on the Moto X4 or Moto Z2. The first got leaked quite recently, revealing a detailed list of specs and an official-looking press render. On the other hand, the second is probably the brand’s 2017 flagship offering, befitting such a big event.

There’s also the Moto Z2 Force to consider. Motorola had announced the original Moto Z2 and Moto Z2 Force together last year. It follows that it will be doing the same this year. Furthermore, the Moto Z2 Play has already gone official, so it would make sense for the company to unveil the other 2 members of the series soon after.