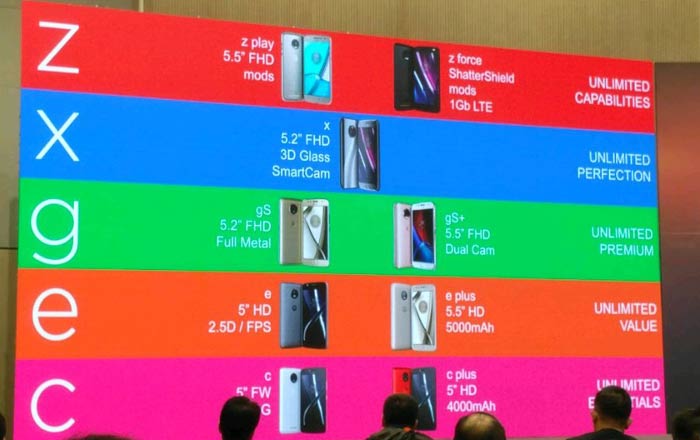 Motorola’s entire 2017 portfolio of phones has been revealed thanks to frequent tipster Evan Blass posting an image of a presentation slide to his Twitter account. The Moto X (2017) recently appeared in a video recorded at the same event, lending a layer of authenticity to the leak.

Going by the information on the slide, Motorola is going to announce new additions to the Moto Z, X, G, E, and C series this year. Specific model numbers haven’t been mentioned, but it seems the first will consist of the Moto Z2 Play and Moto Z2 Force. The former may have a 5.5-inch screen and Moto Mods support, while the latter gets ShatterShield protection and 1GB LTE capabilities.

The X lineup will get just one new member in the form of the Moto X4. The handset has been referred to as the Moto X (2017) till date, but Blass separately revealed that the device will be called by the aforementioned name in a tweet a few days ago. It might come with a 5.2-inch 3D Glass screen and dual SmartCam.

Next up is the G series. This is a bit surprising since Motorola has already announced the Moto G5 and Moto G5 Plus. As it turns out, it’s adding two more offshoots to the line in the form of the Moto G5S and Moto G5S Plus. The former has a full metal body and 5.2-inch 1080p panel. The latter carries a 5.5-inch FHD display and dual cameras.

The Moto E4 Plus is all set to better its smaller counterpart with a 5.5-inch 720p panel and 5000mAh battery. Finally, Motorola’s all-new entry-level C series will consist of the Moto C and Moto C Plus. Both measure 5-inch diagonally, but the former has a 480p resolution and the latter a 720p resolution and 4000mAh battery.