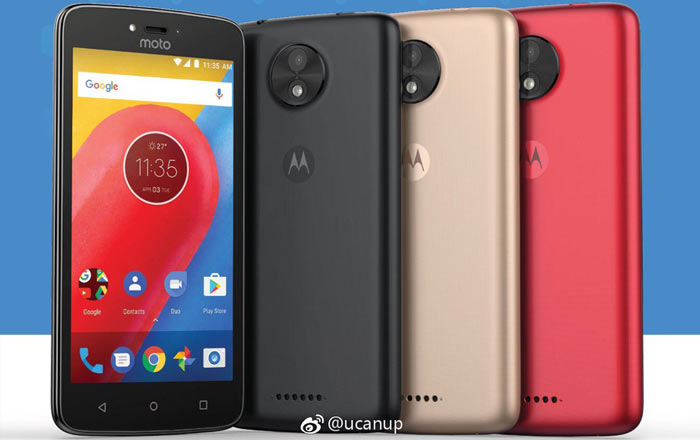 Motorola’s 44th anniversary video brought to light two unreleased handsets called as the Moto X (2017) and Moto C last week. The second is the more mysterious of the two, since it might be the first member of an entirely new lineup.

Clearing things up a bit is a freshly leaked photo of what is supposed to be the Moto C in black, gold and red. The image falls neatly in line with the handset seen in Motorola’s video, showing off a prominent rear-facing speaker grille, batwing logo, and camera setup enclosed within a circle.

The new leak also shows off the front of the device, revealing that it might feature capacitive navigation keys and a compact screen. There doesn’t appear to be a fingerprint sensor anywhere in sight, indicating that the phone will belong to the budget category.

Previous rumors back this assumption up, alleging that the Moto C will carry entry-level specs like a 5-inch HD display and 2GB of RAM. Under the hood, it could be powered by a Snapdragon 430 processor and offer up 32GB of internal storage. A 3800mAh battery may keep the lights on, while Android 7.0 Nougat might run the show.

Photography duties are apparently going to be taken up by a 16MP primary and 8MP secondary camera. If the speculation proves true, it’ll be interesting to see whether the Moto C will fall below or above the Moto E in terms of affordability. The latter is Motorola’s cheapest series in the market at the moment.