Two new Motorola phones have popped up online under the Moto G Titan and Moto E Styx monikers and they’re apparently headed to the US. Both devices are said to be merely updated versions of the current smartphones with LTE connectivity.

GSMArena notes that Argos UK has the Motorola Moto G Titan and Moto E Styx listed on its website along with price and hardware details. The listings have been removed, but there are screenshots available. The new Moto G variant is said to have the exact same dimensions as the current release. 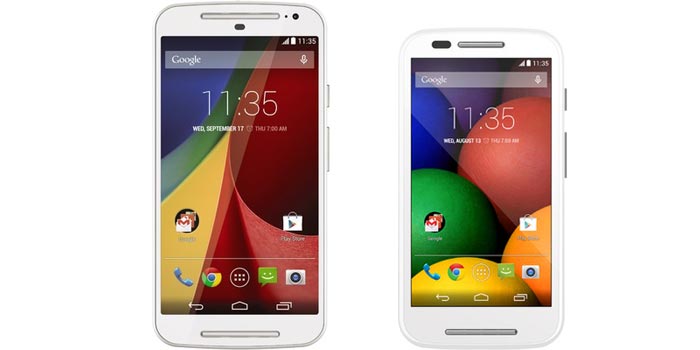 And it’s probably the same 4G version which was announced for China earlier this month. Well, the company did skip out on basically everything about the phone, so that mystery is now solved. Based on what we know, the handset will carry a 5-inch 1280 x 768 pixel display (1280 x 720p is on the original) which is quite odd or most likely a typo.

There will be a quad core processor onboard and we’re expecting it to be the 64-bit Snapdragon 410 which would make it a small upgrade over the current handset. Additionally, the Motorola phone sports 8GB of expandable storage and an 8MP camera.

Coming to the Moto E Styx, Motorola has bumped the processor from a dual core one to a quad core configuration. The chipset used here is probably the Snapdragon 400 in order to enable 4G LTE. Apart from this, the handset will continue to offer the same design and features.

The Motorola Moto G Titan is tagged at £159.95, while the Moto E Styx should retail for £109.95. We’ll have more details to share when the company officially launches both handsets.